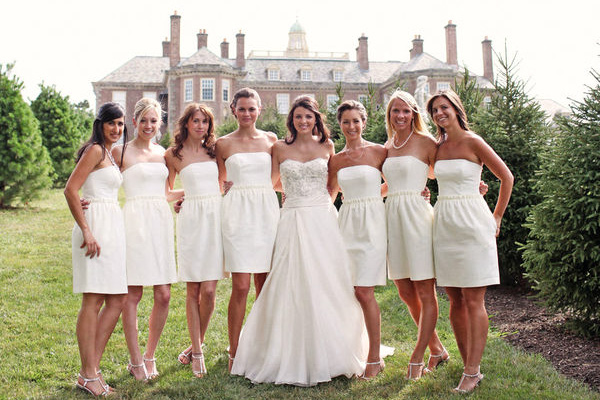 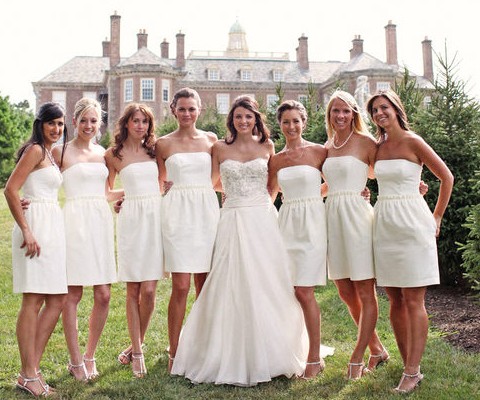 Can Guests Wear White to A Wedding? 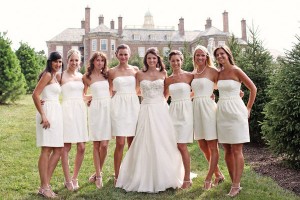 Wearing white is difficult. You gotta wear matching colored underwear or none at all. You can’t get caught in the rain, especially if you chose not to wear that underwear. As women you gotta be extra secure when your Aunt Flo is in town or when you’re eating a meatball sub. You can’t wear it after Labor Day because some snobby rich, white people in the 19th century said you can’t, but never elaborated when that rule is lifted, meaning technically you can’t wear it all year. But you can wear it if you’re part of a private tennis club, in a cult, getting baptized or a bride…

Oh ya, and most people and etiquette books will tell you it’s a huge no-no to wear white to a wedding, but is that really the case?

Modern folks are more likely to say that it’s a sign of bad taste to wear white as a wedding guest. The argument is that it’s uncouth to steal any thunder from the bride by wearing the same color. In the words of Stephanie Tanner, “How rude.”

However, I’m gonna be bold and call B.S. It’s a preposterous notion that guests can’t wear white because it steals attention away from the bride. It’s a mindset provoked by the wedding industrial complex implying that a caveat to extreme consumer spending is that you get to be treated like an individual and heaven’s forbid anyone treads on that.

Still disagree? Well, consider that a wedding is about two people’s desire to commit a lifetime together, not one person and their desire to be the center of attention. If we look at how grooms are typically treated in the clothing department, it becomes apparent that wedding clothing etiquette is not only arbitrarily applied but unfairly gendered too. If the wedding is a black tie affair, the groom will mostly likely be dressed in a black tux just like every other male in the room. If not matching the bride is a legit custom, where’s all the outrage to this plethora of penguins in the room?

To be fair though, it would be super awkward if a guest showed up wearing a legitimate wedding dress. People would honestly get confused about who the bride was. However, your $69.99 white dress from the Gap is most likely not going to come close to competing with the bride’s; unless the wedding is more homegrown and organic than you might want to proceed with caution in case that is in fact the bride’s wedding dress.

Although, how cool would it be if the tradition was for guests to wear their own wedding garbs as a sign of solidarity to the newlyweds? Sure, everyone would look the same, but it’s sort of like welcoming them to the club. Plus, it would be an occasion to wear that expensive Vera Wang again.

Dressing like the bride is not as big of a gaffe as it sounds. It’s actually more common than we think. For most of bridal history, bridesmaids dressed the same as the bride. It was thought that demons wanted to place bad luck on the bride, so to deter and confuse them bridesmaids dressed as mini-brides to play defense. The practice disappeared when weddings became more commercialized in the 20th century and when companies pitch individuality over community and sharing. Once in a while we still see this tradition though, such as at Kim Kardashian’s first wedding and at Kate Middleton’s. And occasionally, the newlyweds ask everyone to wear white.

And it’s not just the scorned bride taken off her pedestal that a guest in white needs to worry about according to Martha Stewart. She says it’s technically okay to wear white to a wedding but warns against it because you might have to deal with bitchy, behind-your-back comments from other guests. Sorry Martha, but that’s sort of like victim blaming. If the problem is bitchy comments, don’t tell people to change their perfectly acceptable behavior in order to avoid assholes. Write the etiquette article about how judging people out of earshot is really mean, especially if they don’t know what they’re talking about! Just saying…

If you’ve got a white or off-white dress you are just dying to wear to a wedding, here’s my advice – ask the bride if it’s okay. That’s the polite and safe thing to do. Some brides might be cool about it, some might not be. However, a bride’s reluctance to say yes might be a knee-jerk reaction. Back when I was a bride, I probably would have raised an eyebrow to this request, but that was without me knowing everything we just covered in the first place. Knowledge is power, you know? Now we’re here reading and thinking critically about it, hopefully with wine, and in the comfort of a Snuggie. It’s important to understand that you might get turned down and she might be offended at the request, which in that case you can send her this article. Or maybe you’ll be given the green light and you’ll have a great time at the wedding dressed as yourself and in solidarity with the bride defending her from all those bad demons. Then, everyone wins.