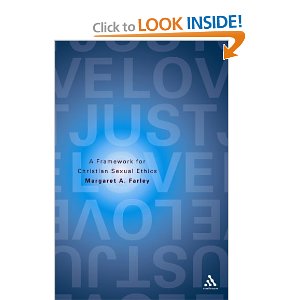 celebrity shotgun weddings, abortion, cohabitation before marriage and the plethora of conflicting opinions on sex, the one thing we can all agree on is that we all have sex on the brain.

New York Times’ Maureen Dowd takes a look at a book called, “Just Love: a Framework for Christian Sexual Ethics” by a Catholic nun, Sister Margaret Farley, who also has sex on the brain. Sister Farley is a 77-year old professor emeritus at Yale’s Divinity School, a past president of the Catholic Theological Society of America and an award-winning scholar. The book is about taking an ethically look at sex in modern society.

Not since the days of Sister Mary Clarence, has the Catholic church been in such an uproar over a nun’s unorthodox doings (this is a Sister Act reference for you Whoopi fans out there).

Not surprisingly, the Vatican denounced the book. Dowd takes the opportunity to talk about the Vatican’s response and point out its continuing sexual discrimination and hypocrisy.

The article is a good reminder (worth a read) on how sex really controls the personal and civil lives of people. Until we can admit we all have sex on the brain and are willing to have an adult conversation about sex’s role in modern society outside stodgy, ancient texts on it, and recognize that [responsible] sex is good for both the body and all relationships, rather than just a function of marriage, sex will remain a lurid and debated topic. And nuns like Sister Farley will be ostracized and forced to live a chaste existence.

Is Pleasure a Sin? – NYTimes.com.