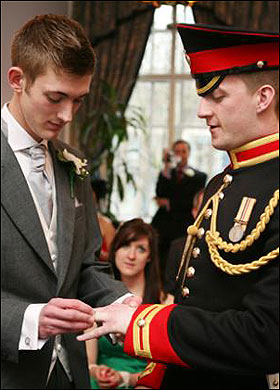 members still face considerable discrimination. While other states are providing equal marriage benefits to gay couples as we speak, the US military and Pentagon will maintain its stance on gay marriage based on the “1996 federal Defense of Marriage Act — which defines marriage for federal program purposes as a legal union between a man and woman” Meaning legal gay marriages will not and can not access the same rights as straight married couples through the Defense Department such as subsidized costs of medical care, travel, housing and other living expenses.

“That means housing allowances and off-base living space for gay service members with partners could be decided as if they were living alone. Base transfers would not take into account their spouses. If two gay service members are married to each other they may be transferred to two different states or regions of the world. For heterosexual couples, the military tries to avoid that from happening.”

Hopefully gay couples and families will enjoy the same benefits and protection rights as other heterosexual families, they too are making sacrifices to protect a county.

Photo: One of Prince Harry’s men has made military history by becoming the first soldier from the Household Cavalry to marry his boyfriend