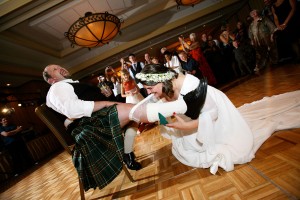 A bridal bouquet usually costs mucho dinero (I think I paid over $100 for mine in 2010), so it can be hard to justify tossing it away for someone else to keep when you barely had any time to bond with it. It also stops a bride from being able to dry it out and keep it for eternity in their hutch á la Miss Havisham. There’s also plenty of feminist reason to modernize the bouquet especially so it’s less of a double standard and pushy-marriage game. So if you’re on the fence about whether or not to play the game or want to update it to minimize the downsides to the traditional rules, here are ten modern wedding bouquet toss alternatives.