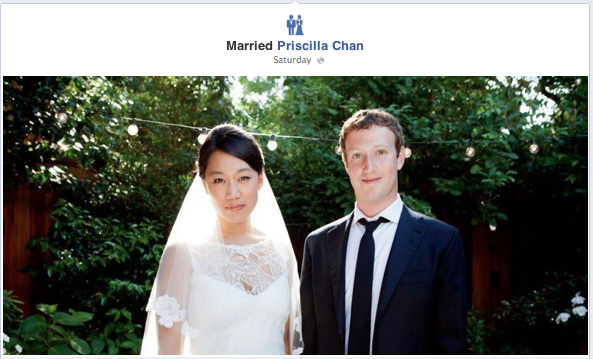 A few years ago, a friend of mine kindly congratulated another friend’s parents on their 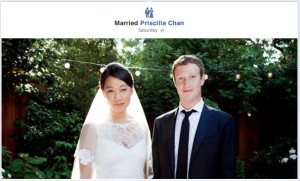 sons engagement, except the parents responded with, “wait, what engagement?” Seems Junior told the Internet world on Facebook about this big life event, but forgot to tell his own parents. Drama ensued and my friend felt terrible even though she didn’t do anything wrong.

Seems Mark Zuckerberg pulled a similar stunt in a triple crown move: at his own wedding, on Facebook and to the world.

Zuckerberg married longtime girlfriend, Priscilla Chan in their backyard in Palo Alto, California last Saturday (May 19, 2012). According to news reports friends and family were arriving for a regular party when the couple said, “Surprise, this is actually our wedding!” (If you want a similar surprise wedding, I highly recommend Parks and Recreation’s Andy and April’s wedding.)

Guests were extremely surprised and so was the world who found out through Zuckerberg’s own relationship status update to “Married.” It seems in terms of wealth and celebrity, this is one of the most successfully kept wedding secrets in pop culture history. The paparazzi are probably pissed.

But there’s more to celebrate than just saying, ‘I do.’  Chan just graduated from medical school at the University of California at San Francisco earlier in the week. And Zuckerberg’s company IPO-ed the day before his wedding. If he was grossly rich before he is now stupid rich.

And this is where news outlets are raising their eyebrows about Zuckerberg’s recent influx of money and the timing of his nuptials. Some are calling it fishy. Personally, I’m not surprised by the grouping of such big events for the happy couple. The IPO and Chan’s graduation date would be a good smokescreen for wedding planning. It’s not like they needed to set up a registry and go that traditional route, instead they surprised friends with a good ole’ fashion backyard wedding that’s totally inline with the couples low-profile lifestyle and Zuckerberg’s casual closet (he did abandon his usual hoodie for a suit). And the plan worked, the cakes on our face for not figuring out his scheme.

But the fishy part comes, not from their reception food, but the fact that Zuckerberg’s IPO cash is protected under California’s communal property law. Technically speaking, Chan has no legal right to his fortune’s since the IPO occurred before their nuptials. Should they ever get divorce, there is a good chance she could fight and win more money beyond what Zuckerberg earns post-nuptials because of her support and influence on Zuckerberg and Facebook. She has inspired Facebook’s Organ Donor campaign and she’s been dating him for nine years, since their sophomore year in college and Facebook’s inception. Was this chain of events on purpose? Probably, but Chan should never suffer a financial drought. Between her own career and Zuckerberg’s earning potential, the couple in or outside of marriage will want for nothing.

Prenups are meant to protect the assets each individual couple brings into the marriage, it should not be interpreted as an ominous sign for the future. Actually, both are highly educated (Okay, Zuckerberg is a drop out, but it was Harvard) (Chan also graduated from Harvard in 2007 and now has a Masters), both are financially secure, dated a long time and are on the end of their 20’s (he’s 28, she’s 27, the average marrying age per sex). If a marriage is to last, these are the best facts you can have in your corner. Even living together before marriage is no indication of success. They stay out of the spotlight and live a moderate lifestyle.

Unfortunately, Facebook followers of Zuckerberg did not share the couples happy sentiment. Many responded with racial slurs saying that Zuckerberg has an Asian Fetish or that Chan is a golddigger and that this is probably nothing more than a green card marriage. No word on whether he’s ‘unfriended’ any of these people amongst his 14m plus subscribers.

This raises another big issue – Facebook etiquette. Facebook scrubs for pornography, harassing photos, etc. but what about the general lack of kindness in others? Did the founder himself have it coming for Facebook’s continuing privacy issues? Or is this a huge reminder that nothing we share on the Internet even amongst our community of friends and family is really private and safe?

Back in the day, engagement and wedding announcements were down via snail mail and a phone call. Nowadays our milestone communication is much more informal – we share our big news on Facebook. There’s now a growing culture to take photos of one’s engagement ring or proposal and share it with the world. Some interpret is as a positive, sharing experience, but in no other instance do we condone showcasing a luxury good around (didn’t your mom teach you bragging was bad manners?). Some though, not wanting to rain on others parade, remain silently unappreciative of the non-stop relationship status updates, the staged wedding photography, the emotional rants of those in love. I suppose at the end of the day it’s our choice as to who we follow, read and what we share. Zuckerberg’s wedding announcement is a good reminder of how our precious moments intersect, coincide and sometimes conflict with technology. Even the founder, himself, thought it better in the long run to keep the majority of his relationship and life events analog.