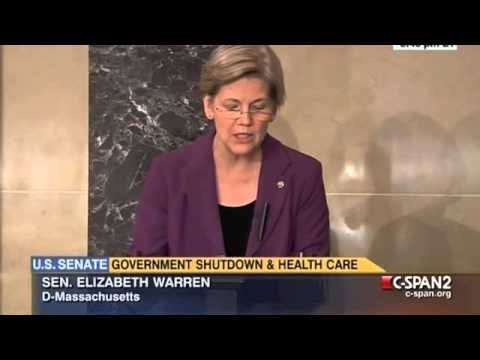 Senator Elizabeth Warren takes to the podium on the Senate floor on September 30, 2013 to remark on the devastating impact this government shutdown will have and how it is basically a ransom tactic for Republicans to get their demands met. If you’ve ever watched Senator Warren speak publicly, you know she’s forthright and likes to rely on facts and decisions (Watch the hearing on the minimum wage as a good example).

What’s awesome about the speech is that she goes into how it affects women and how this shutdown is based on obsolete ideologies and not modern lifestyles. Not only that, they are catering only to their own agenda and not the welfare and benefit of a diverse nation of peoples. Senator Warren explains how a minority  group of Republicans are taking the economy hostage and more or less refusing to participate in the democratic process that America prides itself on.

I think it is safe to say the level of frustration among all Americans and government employees runs at an all time high. While there’s a lot of finger pointing going on in the House right now with simpleminded slamming, it’s nice to hear a congressional leader offer an opinion that is not based on derisiveness or ugly tactics, but on reason and empathy. And as woman and the feminist bride, who is always constantly concerned that my access to reproductive freedoms will be limited or taken away, it’s reassuring to know that someone is looking out for me and women like me.

As far as Obamacare goes, having grown up in Massachusetts with a father who’s worked for a major healthcare company for over thirty years I’d like to think I have a unique personal insight into state enforced healthcare. I’ve always been fortunate to have excellent health insurance, but there was a period of about two years when I just chose to opt out. The penalty I paid for not having healthcare each year as a Massachusetts resident was about $41 dollars. Now I understand the arguments against big government, but I had two choices with this mandated tax; I could throw a tantrum, refuse to pay it and shutdown the government or I could just pay the measly $41. When I tried to get independent, private healthcare in the middle of that two year period, I was denied for having Reynauds. If you’re unfamiliar with the disease, I was denied healthcare coverage because my hands get cold. You know how I cure it? I put on gloves. If you want to have an eye opening read on how the current system is horrifically broken I suggest reading Time Magazine’s The Bitter Pill: Why Medical Bills Are Killing Us. It’s clear there’s a lot Americans need to work on and improve and who’s to say how we’ll need to recover from the shutdown, but I feel like I can rest a little bit easy with Senator Warren in my corner. There have been many times when I’ve been amazingly proud to be from Massachusetts, this is another moment.