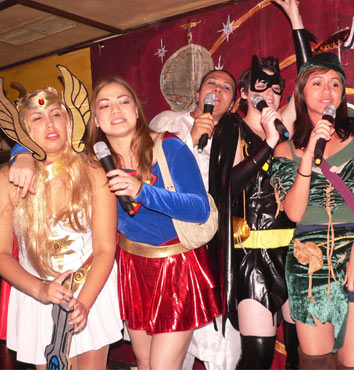 A stag (bachelor) and hen (bachelorette) party are something to behold, but in feminist bride fashion first: 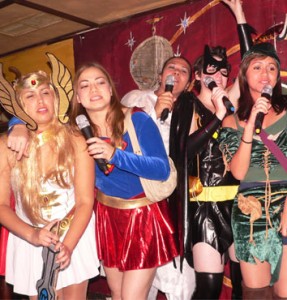 Why do men get to call their parties after a noble animal, and women get to name theirs after one that poops eggs? Better than naming a group of women after a brood of cackling hens, let’s rename them lioness parties.

On a 2011 summer trip to Edinburg, Scotland, my spouse and I celebrated our one-year anniversary. What we thought would be a magical weekend full of castles and becoming famous by discovering the Loch Ness monster, ended up being caught in an endless sea of stag and hen parties. Little did we know, Edinburg was party central for them, and little did we know, the romantic room we booked over a pub would be on top of were they all congregated from 10am till 2am (Yes, 10 AM).

What is unique about stag and hen parties is that one; they seem to include people of all ages – your mom’s mom, your aunt, you, all the way to your local librarian it seems. Wondering what all the ruckus was that made our anniversary bed vibrate (it wasn’t us), we wandered into an underground club blasting Katie Perry to Lady Gaga while grandpa got jiggy with it next to some bride-to-be in her 1.99£ tiara, veil and sash.

The second amazing thing is the dedication to costume these groups have: from sexy sailors to sexy witches to something else sexy. Every hen party is decked out in an outrageous costume. Equally amazing is that while, the stag parties don’t seem to dress up as much there were a lot of men who looked liked they had found an equally drunk girl to pull a phone booth clothing swap. There was always a barely coherent guy in a tilted wig, a mini skirt, trying to balance in high heels on cobblestones while trying not to spill his ale. The next blight, post plague, for this little medieval part of Edinburg seems to be hen and stag parties because many pub doors had written warnings on them reading, “No fancy dress allowed.” For an international b-party, dust off a Halloween costume and head to Edinburg. It was such a sight that on our one-year anniversary, my spouse and I starred at others more than at each other, but we made wonderful memories anyway.