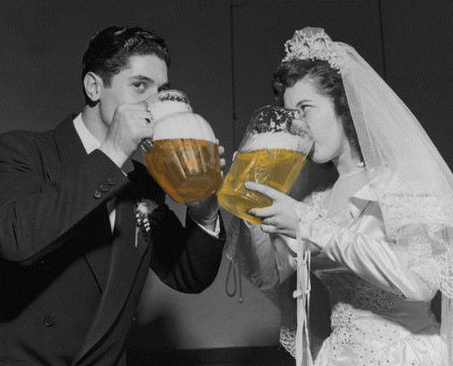 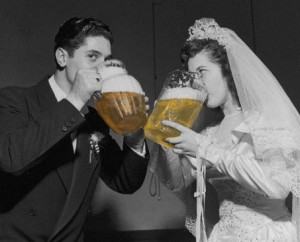 Are you a beer-loving bride or groom? If yes, then that’s a good thing because craft beer is hotter than the stripper at your bachelorette party. If you’re not a big fan of the bubbly and not so much into wine, the many styles of craft beer now available may be perfect for serving at your wedding festivities then. Even better, many new breweries offer tasting rooms and gastro pubs, which might be great for hosting your next wedding event too (If you ask me, a bachelorette party pub-crawling through some good beer bars is simply more appealing than an endless succession of vodka and Red Bulls at clubs playing music that will make one’s ears bleed.) To get you on your marital way, here is a list of eight appropriately named brews (and some by woman brewmasters!) for your nuptial imbibing.

Romantic Chemistry is, presumably, how you got to the altar; it’s also how the married founders of Dogfish Head in Delaware managed to make their aptly named and fantastic IPA. Romantic Chemistry is on the boozy side at 7.2% ABV, so you don’t need too much chemistry before you start feeling, ahem, special. It is made with mangos, apricots, and ginger then dry-hopped with three different hops, giving it a sweet, fruity side to compliment the hoppy bitterness.  This beer is delicious and goes down super easy.

Love Me Long Time is a pilsner (and perfectly named since it’s a session beer) by the lady-founders and brewers of Throwback Brewery in North Hampton, NH. At 4.8% ABV, you can love-it-for-long-time without losing your head. I’d like to imagine they gave the beer its namesake in order to wish you a long and happy marriage between you and your favorite beer – I mean – spouse. Other lovey-themed namesake beers include: Hog Happy Hefeweizen, Hopstruck Red IPA, and Maple-Kissed Wheat Porter)

Intercourse Brewing Company, started by a woman in Lancaster, PA, offers great titillating, wedding-themed beers. She named the brewery after the town of Intercourse in Pennsylvania (it’s, incidentally, a dry town), not sex (sheesh, get your mind out of the gutter). But speaking of sex anyway, you know how when you’re a kid and see bridal showers in the movies, the bride gets gifts like lingerie and sex toys, but you grow up and find out that doesn’t ever happen at real bridal showers? Well, Intercourse brews would be perfect to serve at a shower inspired by those awkward movie scenes. Bareville (Pilsner), Mount Joy (Light Pilsner), and Paradise (Pale Ale) are among the brews made by Intercourse Brewing – again, all named for locations in and around Intercourse. These are just a few of the fun beers you can look forward to sharing with grandma when you hand her a refreshing Blue Ball (Porter).

Fierce is a Berliner Weisse out of Off Color Brewing in Chicago. Fierce (for you feminists out there) is also how your wedding team will be looking and feeling hitting the town for the bachelorette party. With 3.8% ABV you won’t be able to blame your bachelorette shenanigans on the beer though. This is a nice sour beer with some bite, so it’s still fun to drink even without all the alcohol. Also, bonus, the name, Fierce was inspired by the badass women brewers who trained the Off Color brewers on how to brew beer.

Bridesmaid’s Tears is a 6.6% ABV Kettle Sour Strawberry Rhubarb Saison made by Noble Rey Brewing Company in Dallas, TX. This might be a good one for when you’re done feeling fierce because the bride is having a bridezilla moment. It’s another sour beer but the bite is cut by the sweetness of the added strawberries. Fair warning though, switching to Bridesmaid’s Tears after Fierce (with it’s higher alcohol content) might inspire everyone at the party to get all emotional and tell the bride how happy they are for her…ten or twenty times. (And just in case, you are hosting your bachelorette party on the water, they also make Light Lager called Sex in a Canoe.)

Lovebird is a lovely little Hefeweizen made with strawberries and raspberries by Jackalope Brewing Company, a brewery started by a couple of girlfriends down in Nashville, TN. Lovebird is a seasonal beer, making it perfect for a spring or summer wedding. The added berries make it sweet and tart and give it a pretty pinkish hue. And with only 4.4% ABV, you can spend the entire wedding toasting your friends and family without ending the evening feeling like you’ll bust out of your wedding outfit.

Wedding Daze Imperial Stout is made by Lefty’s Brewing Company, a brewery started and owned by life partners in Greenfield, MA. Wedding Daze is a thick, heavy imperial stout. Since it is barrel aged, it has warm and delicious hints of bourbon, vanilla, and caramel, perfect for sipping on a chilly autumn or winter wedding day. And sipping is what you’ll want to do with this super boozy, 12% ABV brew (unless you’re not so sure about this whole-getting-married-thing and think the day would be best spent in a daze).

My Better Half is an Imperial Cream Ale by the Somerville Brewing Company in Somerville, MA. True to the beer’s name, a wife-husband team started Somerville Brewing Company and gave it the motto “make good liquids, make good friends.” (A great motto if you’re hoping for your future in-laws to get along too.) My Better Half is surprisingly strong at 7.2% ABV, but this is a very smooth, very easy drinking beer, a good liquid for sharing with good friends on a good day.