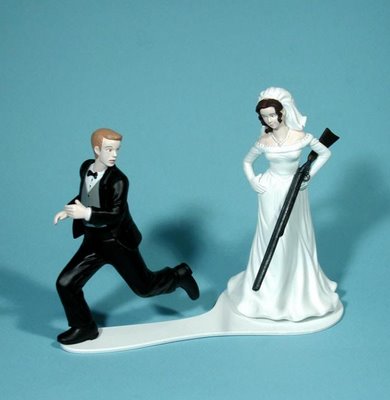 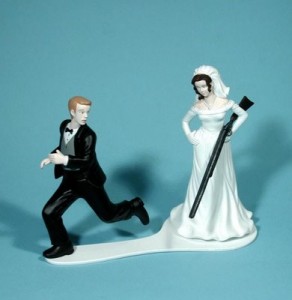 My wedding cake topper was also my “something old.” It was over 30 years old and last saw a cake at my parents’ wedding in the 70s. I spent at least an hour trying to bleach it white. Before deciding to use it, I debated between going simple with just flowers since I had been both tickled and horrified at modern cake toppers. Seriously, have you seen them lately?

With fondant, 3-D printing and the mass-production of wedding tchotchkes, you can literally get any type of cake topper your heart desires. Literally. If you desire the bride to be an astronaut riding a pink, winged unicorn and for the groom to be a vampire viking from the future, someone out there can make it. And toppers can be pretty cool – what other excuse do people have to order personalized bobble heads in their image?

That said, the traditional bride and groom topper in a gown and tux are everywhere, but nowadays they reflect a certain crude humor to them or a homogenous use of imagination. First we should point out that these toppers will most likely feature white heterosexuals (good luck everyone else) and will either be brandishing a gun, fishing rod or electronic device or representing only the groom’s outside interests. True some are romantic, but many others usually feature someone trying to run away from their impending nuptials like they were forced to be there. When I first saw these later ones, I thought it was kind of funny; then it dawned on me how horribly sad they are. What does it say about a couple’s future when the quintessential wedding tchotchke is of one person is represented as NOT WANTING TO BE THERE? There’s even one that looks like a violent domestic dispute… What are modern cake toppers trying to say about marriage and the individual couple? Seriously, why are men still shown as people who don’t desire marriage, when, as tradition would have it they are the ones who usually propose? Why cake tops; why spoil the cake with your outdated gender roles and off-color humor?