I was just in Edinburg and all I saw was a bunch of drunk hen and stag parties! This would have been much more exciting.  Zara Phillips recently married England 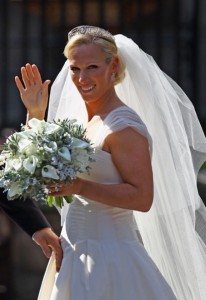 rugby union player Mike Tindall, and has elected to keep her maiden name because she thinks it will be better for her equestrienne career. One news source claimed that keeping her maiden name was not “any kind of feminist statement” but I highly disagree. A woman keeping her name in support of her career, her heritage, and family just to name a few reasons is a great reason (and a feminist one I might add, because it is a choice that honors one woman and promotes all of them).

Phillips is the second child and only daughter of Princess Anne and her first husband, Captain Mark Phillips and is thirteenth in the line of succession to the throne. (And yes Kate and Will were in attendance). Phillips is the former Eventing World Champion, who won the World Championship in Aachen and was voted 2006 BBC Sports Personality of the Year by the British viewing public (an award her mother won in 1971). She was appointed Member of the Order of the British Empire (MBE) in the 2007 New Year’s Honours List for her services to equestrianism.

For more Information and photos go to: Zara Phillips to keep maiden name after royal wedding to Mike Tindall | Metro.co.uk.