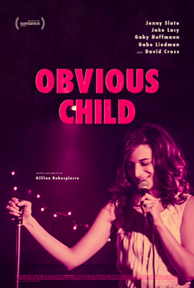 A Rom Com Gets Real Over Choice – OBVIOUS CHILD

In the saccharine land of rom coms, plots can be trite, characters undefined and sappy sweet endings all too predictable for most movie goers. And the worst part is that they are usually geared towards women. No one wants to watch the same movies with the same formulas. If you’re like me, you’ve been looking for something different, endearing and more in touch with reality.

That’s where Obvious Child (2014) comes in by writer and director, Gillian Robespierre. Unlike rom coms being about getting the boy or choosing love, Obvious Child is about what a woman chooses for herself – in this case, an abortion. It follows Brooklyn comedian Donna Stern (Jenny Slate) who gets dumped, fired and pregnant just in time for the worst/best Valentine’s Day of her life. The best part about the film’s description is that it focuses on the nature of the Donna’s choice and how after everything, she ends up all right.

With the help of Robespierre’s friends and coworkers, Anna Bean and Karen Maine, they wrote and produced a short film version in 2009. “We were frustrated by the limited representations of young women’s experience with pregnancy, let alone growing up. We were waiting to see a more honest film, or at least, a story that was closer to many of the stories we knew.” Too many times, films singularly depict abortions as religious immoral decisions or heavy emotional burdens, but such a topic does not always have to be heavy hitting and controversial.

What I loved about the idea to this film (which is why I chose to donate to it) is how imperative it is to see women’s issues addressed in different ways – with humor and wit. I also loved the women power behind this film, something seldom scene. Kathryn Bigelow is not the only female director tackling hard issues in interesting ways.

The film has been accepted to the upcoming Sundance festival, but it still needs friendly support to see this film come to reality (donations support final touches and distribution). It is currently seeking funding on Kickstarter. $10 gets you an online screening of the original short film. It’s $14k short and only has 22 days to go! Sometimes, women have to go to extra lengths to support their sisters and get better pop culture representation. Ladies, give the gift that will give back to yourself! The best part is that you can do this from the comfort of your own home. In a time, where abortion rights and access become increasingly limited in the United States, sometimes it’s movies like Obvious Child that can entertain us, but also send an important message that when it comes to abortion, whatever we choose, we’ll be all right.