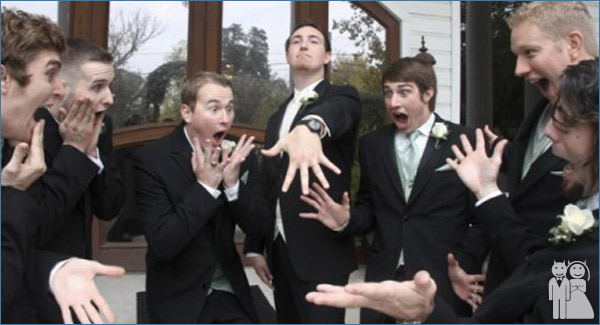 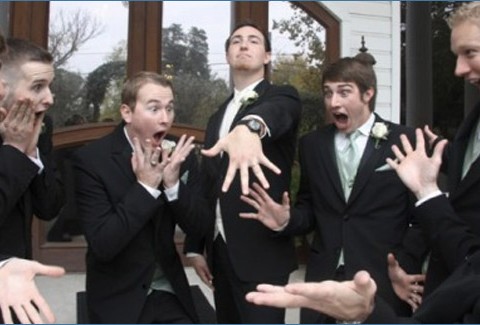 Admitting Groomsmen Have It Better Than Bridesmaids

I know that by saying I’d rather be a groomsman over a bridesmaid, it sounds like I’m confirming the old 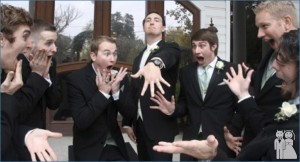 Freudian theory that feminism is nothing more than penis envy. Don’t worry Freud, this has nothing to do with penises or mommy issues. I’m merely trying to bring attention to that fact that the role and responsibility of being a bridesmaid has completely turned to the dark side. Bridesmaids used to enjoy the minimal involvement that groomsmen experience today. Nowadays the difference in the responsibilities of the two are a lot like the wage gap; both sexes enjoy the same status and title but bridesmaids are expected to do a hell of a lot more for the same job! I’m campaigning that bridesmaids and groomsmen responsibilities be on par with each other.

To show that the role of bridesmaid has run amuck, we just need to look at how groomsmen are treated. Groomsmen have it much better than bridesmaids when it comes to finances, clothing and attendance. To start, groomsmen usually only have to rent a suit. If bridesmaid could rent their dresses, the financial burden of constantly being a bridesmaid and buying a new, wear-once dress would be significantly lifted. It used to be customary for bridesmaids and brides to rent their outfits, but consumer business realized they could create an emotional tie between owning and having the perfect wedding; and so the demand to buy was created. However, there are now a few websites like, LittleBorrowedDress.com and VowtoBeChic.com are that offer bridesmaid dresses for rent or purchase. Some brides, who don’t want to play into this rampant consumerism, instead ask bridesmaids to wear either a simple black dress or whatever they want because the fiancés decided to stand at the altar alone.

Even if groomsmen buy their entire or only part of their outfit, a suit is more versatile for professional and personal occasions than a bridesmaid dress. Not to mention they get to wear flats all day unlike women, who usually wear heels. Wouldn’t it be awesome if a trend started, where it was also cute for bridesmaids to wear matching Chuck Taylor Converse sneakers with their formal wear like groomsmen? Our feet would totally thank us.

Bridesmaids are also expected to participate in a plethora of parties. It’s fair that groomsmen and bridesmaids are equally responsible for hosting a bachelorette and bachelor party, though that’s about where the fairness ends. Bridesmaids are still expected to host and pay for a wedding [bridal] shower. First, bridal showers are now called wedding showers because “bridal” is considered unfairly gendered since the gifts are for “both” the groom and the bride. This gender-equal party name is a smokescreen though because the reality is that the groom is rarely present at the party. Furthermore, if it were really about the couple, men would be invited as party guests and the groomsmen would be equally responsible for party planning and funding. They are not.

When I speak to men about their roles as groomsmen, most are grateful for their workload especially when they see what bridesmaids are required to do. As mad as that makes me, I can’t blame them for feeling that way. It’s true; they totally have it better. Groomsmen are simply expected to show up to the bachelor party, rehearsal dinner, maybe hang out before the wedding (for example, to play golf, which I wouldn’t mind doing too) and show up to the wedding. They just have to be present with a good attitude. As a bridesmaid, showing up is seldom enough to do the job well. Bridesmaids are expected to devote unlimited amounts of their time, energy and love.

Bridesmaids are also expected to physically and emotionally support the bride throughout the entire wedding process too, sometimes planning and helping more than the groom himself. I understand that helping the bride as a bridesmaid is part of this idea of female camaraderie that has developed over decades, but if we’re talking ultimate equality why would it extend far beyond the efforts of the groom? It’s his party too! If we are really interested in equality in the home, shouldn’t there be a rebalancing between the effort, time and money that brides and grooms, bridesmaids and groomsmen put into a wedding? (And of course, giving groomsmen more responsibility is an option too.) As independent adults, shouldn’t the bride and groom be responsible for their own nuptials first and foremost?

The heavy workload that bridesmaids carry is reflective of a time when the wedding was really considered women’s exclusive domain. This is not, nor should this be the case anymore. If we want equality in the home, a rebalancing of people’s contributions towards wedding planning needs to happen. A good barometer of wedding equality is gauging whether or not bridesmaids and groomsmen have similar job descriptions. As of right now their titles are equal, so there should be no difference in what’s expected of them. So when it comes times to pick out your wedding party, think hard about what you want and expect them to do and then reflect on whether responsibilities can be better distributed between all parties. I bet by redefining the job description of what a bridesmaid does and making it equal to that of a groomsmen’s, those friendships will feel less overtaxed, less like the indentured hired help and more like an appreciated friend who is really just there to give you the thumbs up rather than there to lift a finger.