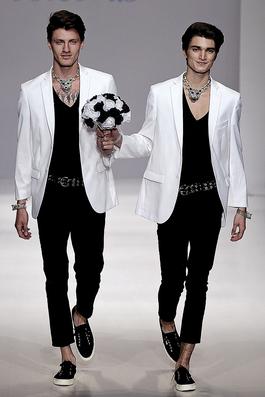 I never know what to make of Betsey Johnson. She’s kinda like your great Aunt that’s a total wild card, who curiously resembles your thirteen year old niece, who’s currently finding herself by defying convention. When it comes to fashion, she’s a great reminder of how far fashion can go and how much you don’t have to give a hoot about other people’s opinions so long as you’re happy.

And in addition to all her fun eccentricities, she’s got amazing feminist bride stories like how she was sent home from her own wedding in 1967 due to her Victorian velvet pantsuit because, “they wouldn’t marry you in pants.” And then just when you think she gets even more cool, you learn her reaction to this gendered double standard was, “I was went back in a crotchy mini-skirt. I went back in the shortest little suit.” To boot, Warhol attended her wedding. Yah, she’s kinda super, feminist cool.

For her Spring 2015, Betsey Johnson fully embraced her inner feminist bride by having a wedding themed show that championed all forms of love and people and for some reason – prenups (she has been married three times). Johnson has a new bridal line, which started with shoes and lingerie. Her fashion runway show, however, featured bridal and bridesmaid dresses, pre-wedding jumpsuits and the all-important honeymoon lingerie. The show appears to take the ever-present issue of marriage equality and bends the notion of gender for brides and grooms into one huge hydrogenous amalgamation of tulle. The collection redefines who marriage is for and shows how anyone can be a blushing bride.

In the land of fashion risk-takers, Betsey Johnson stands at the forefront. Given her personal story of gender fashion wedding defiance, it comes as no surprise that Betsey created such a fearless runway show. It is just as much about fashion as it was marriage equality. Pragmatists might snub the idea that fashion can create social change, but gender-bending shows like this one might actually have the power to change people’s perception. After all, all modern wedding traditions exist as a result of commercial industries. Pushing the boundaries of how we visually think of weddings dislodges it from its stagnant foundation that currently excludes people from it. If Betsey’s signature end-of-the-runway cartwheel and split landing at the age of 72 is a metaphor for marriage equality’s future, it’s that risks can be scary but we’ll all be alright in the end.

For a complete look at all the fashions, check out Style.com.