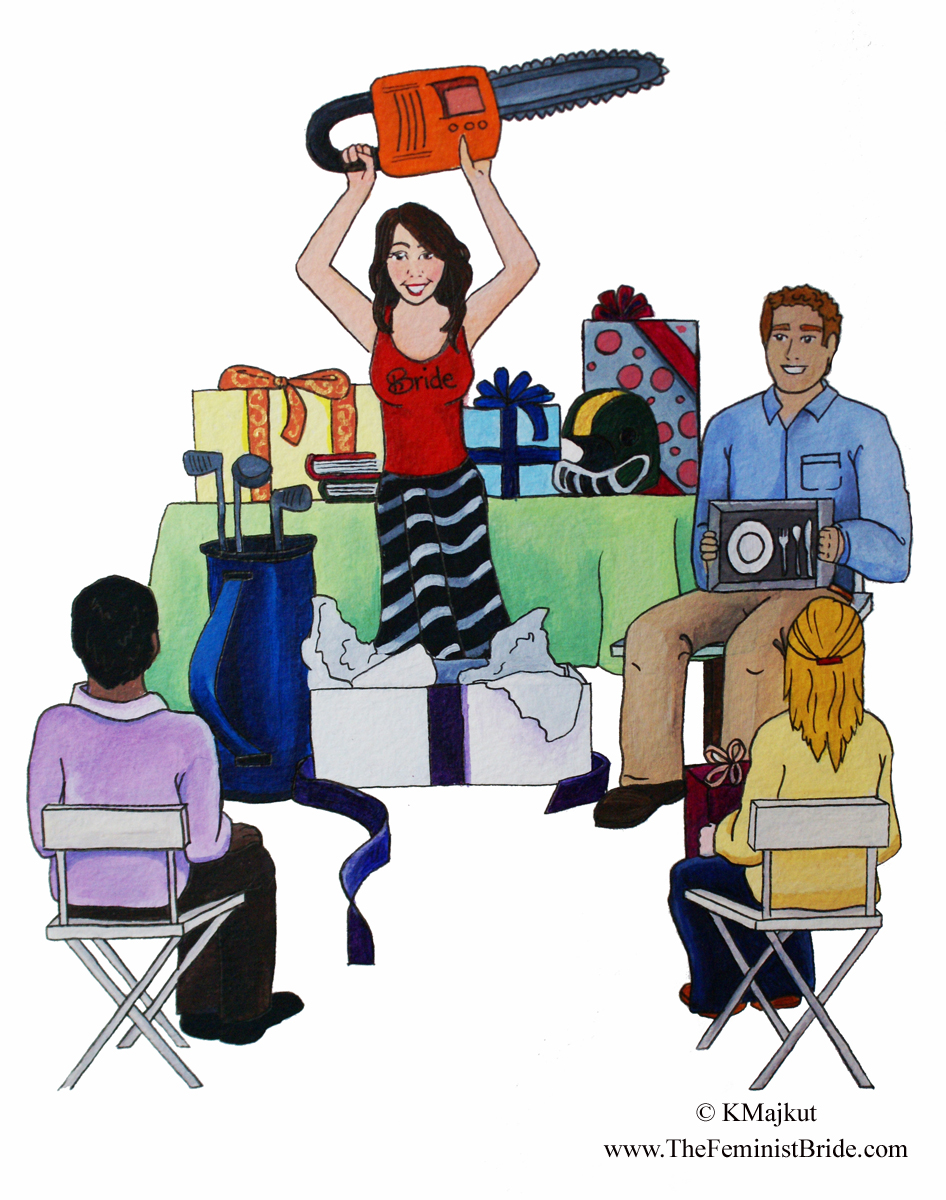 Suffering from The Bridal Shower Blues?

Of all the traditions associated with weddings, bridal showers might be one of the 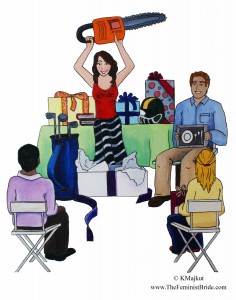 most obsolete traditions remaining. While there’s hope with the new trend of “Jack and Jill” showers (both sexes), it remains narcissistically sexist, greedy, outdated, and well, cheesy.

Bridal showers didn’t always paint such a morbid picture. On the contrary, it was an occasion for friends, families and neighbors to contribute the items necessary for a newlywed couple to build a proper home. Once upon a time, a Dutch woman fell in love with a poor man below her station. The father forbade their marriage on the grounds that the man could not provide for his beautiful daughter. Upon hearing the father’s wedding denial, the village came together and gifted household items to the couple until the father acquiesced to the marriage. And they lived happily ever after with a fully stocked kitchen. This true story would mark the inception of the bridal shower tradition. 300 years later not much has changed.

The tradition started because the Dutch couple did not have the resources to start a life together. Modern couples do not similarly and necessarily suffer from a lack of resources today. Individuals now live away from their parents care and hold an income-earning job, most are self-reliant enough to live comfortably and provide for themselves. We are also living in the age of IKEA, Craigslist and the Internet, most people either have everything they already need or access to whatever they might want. Furthermore, 2 out of 3 couples live together before marriage, implying that the couple has already engaged in a little Saturday afternoon of Home Depot and Bed Bath and Beyond together. Point #1: Whether living single or cohabitating, people are nesting well before the marital bed, making the bridal shower not only extraneous but also slightly self-indulgent.

The concept of bestowing gifts in order to build a homestead is a generous and thoughtful one, and in theory, bridal shower gifts are intended to benefit both the bride and groom. So why is it that only the bride receives the domestic, household gifts? And what does it mean when only females bestow these types of gifts? Bridal showers perpetuate the stereotype that a wife’s responsibilities are in the kitchen and the husband’s, being that he is absent from this affair, are not. I’d love to see a bride open a gift at a shower and find a chainsaw or golf clubs inside.

It’s not a personal vendetta against kitchen appliances that propels my argument; I love me a coffee machine and garlic press. But by the third gift of cookware or extravagant stainless steel utensils, the party’s goal of creating a domestic goddess is all but inescapable. What happened to the woman who focuses on work, orders take out and thinks that marinating is a process through which you take your time to ponder an idea? That woman all but disappears as a bride attending her own bridal shower. Suddenly, she’s oohhing and ahhing over crock-pots, butter dishes and salad spinners, and the scene looks indiscernible from a 1950’s Redbook magazine. Modern brides might argue that the intention is not to become a textbook housewife; but the mounds of silvery gift-wrap and three blenders implies otherwise. Why do we practice this old fashioned, domestic fanfare that our mothers and grandmothers practiced if that’s not who we are? Point #2: Tradition should not be performed at the expense of misrepresenting modern women.

So as the bride marvels over a turkey baster, I am the guest that sulks in the corner wishing she were at the dentist or a boring business conference because the bridal shower party leaves a lot to be desired. Apart from the food and booze (muy importante), the party is not a “good time.” Bridal showers are a sea of sundresses, pearls, flamboyantly decorated gift boxes, and polite conversation up the wazzoo. Taking a cue from David after the dentist, this is not real life. Despite the seemingly sincere smiles for the lame bridal bingo game, the repetitive golf claps during the hour-long gift opening session, the frivolous laughter over duplicate platters – sometimes a toaster is just a toaster, unexciting and uninspiring. Brevity and reality are godsends at these parties, which is why I love the dirty Aunt who gives the basket of lingerie, oils and edible underwear because she knows (Point #3) that domestic gifts are not life changing, nor will they ensure a successful marriage; but good sex can.

The purpose of a bridal shower is not always relevant in this day and age. Couples need to make level-headed decisions as to whether this party is a necessary component in building a life together or more of an opportunity to bleed your guests’ wallets dry. Women are no longer queens of the kitchen – in order to break from the symbolic oppressiveness of traditional bridal showers the registry needs to expand beyond the kitchen. And if you still insist on having a shower, women can no longer be the only ones accepting Tupperware sets. If showers are to make a completely modern transformation, the structure of the party needs to accommodate contemporary lifestyles and male guests. Be flexible to encourage people to be and act naturally; abandon the stodgy model of bridal games, superfluous gift opening and library-esque etiquette to create a modern, party atmosphere!

Until then, I’ll be in my corner sipping my mimosa waiting for my unorthodox gift to shock and horrify those who cling to misogynistic bridal shower ideas.