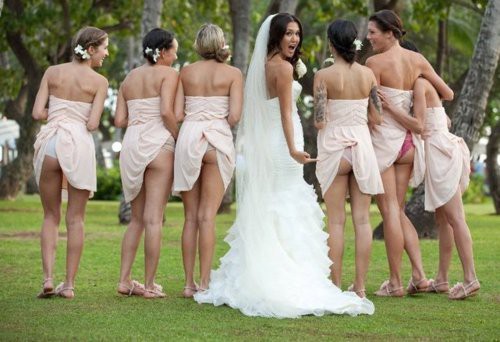 If you’re looking for some real advice as to what type of wedding traditions you should skip, look no 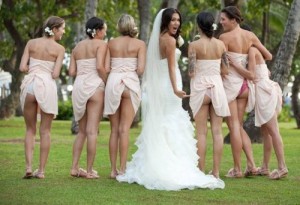 further. Other lists give fluffy advice and are usually limited to things you buy. This top 10 list gives you wedding traditions that are ripe with unfair conditions like sexism or consumerism which can either be thrown out like a garter or bouquet (#8 & #9) or modernized so it treats everyone a little bit better.

There is a way to maintain the idea of parental respect and communication while being a lot more egalitarian. First, change the archaic idea of “permission” to “support.” One option includes each person asking the other’s parents’ permission. The other option includes the couple asking each set of parents for their “support” together. The later option shows real teamwork and would also be the first step the couple would take as fiancés – kinda romantic if you ask me.

2.  Waiting for him to propose – There are one too many ladies in Rom coms, TV shows and real life that complain their beau won’t propose soon enough. Why wait for him, when modern women are completely capable in terms of finances, leadership and passion to propose on their own? Don’t worry about not being on the receiving end; taking the proposal plunge will still be filled with romance. Ladies who propose get the added benefit of being completely in control of their own romantic destiny. And when he or she says yes, that new engagement is going to be all the sweeter because the female proposer is going to feel so empowered.

3.     Making the bride’s family pay – The tradition of the bride’s family paying for the wedding stems from the days of dowries. Dowries and paying for a wedding oiled the pot for when the other family accepted a financially anemic daughter into their home. Nowadays, women’s income earning potential makes this tradition totally obsolete. What’s more is that the tradition is not really fair to her or her family because a wedding is just as much for her fiancé and his family. Instead of the bride’s family covering the tab, split the bill three ways between each set of parents and the couple or the working couple can cover the bill themselves.

4.  The engagement ring – The diamond engagement ring and its associated traditions are actually consumer traditions invented by De Beers and A.W. Ayers advertising company in the early 19th century. Only the wedding band is a true wedding tradition, which stems from Roman times (and even then for-profit business popularized the male wedding band). In addition, there’s also no way to be 100% sure that a diamond is conflict free. To make matters worse, the diamond engagement ring industry has designed the market so that your diamond engagement ring has no resale value thus nullifying its intrinsic value. This explains why the industry also created the superstition that a ring from a failed marriage is unlucky, forcing couples to purchase another one. And wait there’s more, the fact that only women wear an engagement ring highlights a double standard where only women mark their relationship status and men do not. (Plus it’s not fair to men, who are expected to bare the financial burden of buying a ring without any return gesture.) Couples should feel free to skip the engagement ring and put that money towards something more sound or at least both wear one to minimize unfair gender roles. To read more: Are Diamond Engagement Rings Really Worth It?, Where do engagement rings come from?

5.  The bridal shower & registry – The purpose of the bridal shower was to help establish a couple’s household, not for couples to upgrade to a better coffee machine. With 60% of couples living together before marriage and most others living independently before marriage, most have all the kitchen appliances needed to make late night Mac n’ cheese. This makes the purpose of a bridal shower and a registry completely egregious (not to mention perpetuates consumerist wedding habits). In addition, bridal showers are typically composed of just women, implying that a wife’s role is still in the kitchen and her husband’s is not…

Eradicating the bridal shower does not mean couples will be without aCuisinart appliance, guests still bring household goods as wedding gifts but it does start to remove the obsolete notion of gendered domestic ware. If a shower is unavoidable, make it a Jack and Jill party (both sexes). Couples should also be honest about whether registry goods or a shower are really something they need or selfishly want. To read more: Bridal Shower Blues

6.  The white wedding gown – White does not make a bride. Sure it’s customary, but everything about a wedding is customizable including what you wear down the aisle. Colors came with a lot of arbitrary stereotypes that limited people’s enjoyment of them. White was popularized by Queen Victoria because it was considered virginal and pure; and also by the rich because dry-cleaning didn’t exist and they could afford an impractical color. Now barely anyone is a virgin before his or her wedding day and there’s a dry cleaner next to every Starbucks, so wear a color that represents your personality. Vera Wang’s clued into this and came out with a non-white wedding gown line a few years ago. Reese Witherspoon and Jessica Biel are also examples of brides who have opted for something else. To Read More: Vera Wang’s New Bridal Gowns Will Change Bridal Tradition

7.  Taking your husband’s name – There are three reasons this tradition exists. The first is religion. This patriarchal practice takes after Abraham’s wife, who upon marriage was immediately referred to as ‘the wife of Abraham’ (and not vice versa, i.e. that’s a double standard). The second was to separate bastards from marriage-born children and to protect the later. A child without the father’s name was subject to huge forms of discrimination; luckily the US Supreme Court outlawed these laws of bastardy in the 1970s. The last reason was to protect widows who could only inherit if they legally shared their husband’s name through marriage.

Basically, this tradition retains the notion that a woman’s identity is exchangeable and a man’s is not. The tradition also implies that a married woman is better off being represented under her husband’s identity as opposed to the one she was born under. This comes from coverture. Coverture was the legal status of married women into the early 19th century, which cited that a wife’s legal right and existence became the property of her husband. Taking the husbands name was a strong foundation of coverture, which dictated that, “Husband and wife are one person, and that person being the husband.”

Taking the husband’s name is a wholly outdated practice, but it’s still used enthusiastically by brides who think a single name unites a family or is romantic or a generous sacrifice. Modern women have accomplished a lot under their original surnames, just as much as men. With men seldom ever changing their name, the tradition is rife with sexism and double standards, which is why it’s worth abandoning. To Read More: How Well Balanced Is Your Name Change Decision?, Why Women Change Their Last Names After Marriage, VIDEO: Why Do Bride’s Take Their Husband’s Name?

8.  The bouquet toss – This reception game is becoming less and less practiced due to its perceived tackiness, however it unfairly singles out, well, single people. The game’s rules require that only single ladies participate; and its superstition implies that whoever catches the bouquet will get married next. The game signifies that singlehood is undesirable and that everyone in the game should be like the bride – married. If you substitute single people for other types of minorities, the message of discrimination becomes loud and clear.

There is an easy way out of this conundrum though; the first is to just not play the game. The second option is to make it more inclusive by inviting ALL women up to celebrate their general awesomeness, not the bride’s marital status. The bouquet can then represent general good luck or perhaps whoever catches it wins a prize. To Read More: Feminist Fight for Change, Not The Wedding Bouquet

9.  The garter toss – Like the bouquet toss, the garter toss is also becoming tacky and cliché. The garter toss originates from a medieval tradition called the bedding ceremony, where groomsmen would tear and rip at the bride’s gown. It’s basically an age old groping tradition. The garter also unfairly singles out the unattached, but it also comes with some extra baggage. Unlike the bouquet, the garter is sexually charged implying that men can be public about their sexuality and brides, with her asexual flowers, cannot.

Skipping this tradition is an easy solution. If it’s played, think about at least making the bouquet toss just as sexy or substitute it with her removing the groom’s bow tie…with her teeth. Also, feel free to invite all the men up, not just the single ones. There are plenty of alternative options to keep on tossing the bouquet or garter without any sexual double standards or singlism, the newlyweds just have to be creative. To Read More: Garter Go or Garter Stay?

10.  Asking a small army to be bridesmaids or groomsmen – Bridesmaids originated from the superstition that evil demons wanted to cast bad luck on the bride. So bridesmaids dressed as mini brides, like Pippa Middleton, to distract them. Groomsmen originated from when grooms kidnapped maidens from nearby villages and kept watch for angry villagers as the groom consummated the marriage. Today, they are close friends ready to celebrate a newlywed’s new life together. However is having a small army or large entourage really necessary? The wedding party requirements are no small task between the required attendance, the small fortune and the emotional support they provide. Loading up on wedding attendants, won’t make planning a wedding go any smoother nor will it increase the event’s intimacy. Those not in the wedding party won’t be missing out on anything either, anyone can still be invited to the shower, bachelorette party or help stuff envelopes. Do away with the long line of bridesmaids and groomsmen; go with quality over quantity. Everyone will celebrate your special day with you with the same enthusiasm and support regardless of whether they were required to buy a matching, overly priced dress you picked out. To Read More: Creating A Wedding Party: The False Luxury of Many Friends, Battle of the Bridesmaids

10 wedding traditions worth skipping, asking the parent's permission, bridal shower, cake, can you wear a different colored wedding gown?, do you have to ask the parent's permission, do you need, engagement ring, female proposal, gift registry, How many bridesmaids, how many groomsmen, is the engagement ring worth it, male proposal, proposing, taking your husbands name, wedding advice, white wedding gown vera wang, who pays for a wedding