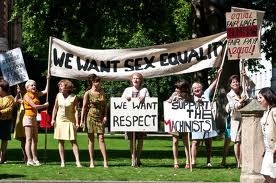 In my initial push to get my spouse to see the movie, he recoiled thinking I was subjecting him to an angry, political female movie (he recanted his assumptions after seeing it). But his reaction got me thinking—this subject matter seems to be only commercially viable if a “spoonful of sugar to help the medicine go down” approach is taken. Women’s hardship stories are fun and valuable for the whole family as long as it has a Disney-esque polish and resolution. This would explain the cute outfits, the fun nods to sixties culture, hoards of afternoon tea and the adorable Rita O’Grady – things that dissuade and disarm a viewer from the issue at hand.

O’Grady exemplifies the classic underdog protagonist – petite and mousy. The “unsuspecting heroine” profile is overused inHollywood’s characterization of women; is that the only way Hollywood can tell and sell a story about a female cause against all odds? If a woman does not exemplify an underdog or the classic sassy and sexy type, apparently no story will be told in Tinseltown.

In researching other movies based on true events, I estimate that nearly 80-90% are either about men or war (sometimes both). Therefore, not only are female characters inaccurately portrayed but entirely underrepresented in non-fiction movies. ‘Made in Dagenham’ provided a memorable quote, “Men write their own history,” and it’s clear that women have simply acquiesced to this (even the Made in Dagenham script was written by a man). When did we lose control of our own stories?

Our voice and representation in media has been so limited historically and today, that a new documentary was recently created to address these very issues called, “Miss Representation.” The film offers very insightful comments from young girls to important female leaders. The general consensus in the preview is that “The media can be an instrument of change, it can awaken people and change minds. It depends on who’s piloting the plane.”

It turns out that we are piloting the plane; we just don’t know how to use it to our advantage.

Media is made primarily by men and for men. It is unfortunate that women consume a near equal amount of it (2009 moviegoer statistics revealed that 55% of all ticket sales are by women, who make up 52% of all moviegoers). If we don’t demand media for women, made by women and change how we’re represented in the movies, we can continue to expect Hollywood and history to create male-dominated entertainment. While the machinists fought a slue of Ford’s male bosses, there was one male sympathizer, Albert Passingham (Bob Hoskins), the women’s union organizer. He offered one of the most poignant observations in the entire movie, a quote from Marx: “Progress can be measured by the social position of the female sex.”

It is well proven that an investment in a woman’s education leads to better health and income earning potential, which positively influences a country’s GDP. The argument for equal pay in the movie may seem obsolete now from a Western perspective, but this is hardly the case (Paramount’s film website does offer a wage comparison…for 1968 only though). TheWorld Economic Forum recently released its fifth annual report on world gender inequality (134 countries were ranked). It ranked the U.S. 19th overall (it was ranked 31st in 2009) stating a main deterrent as “perceived wage inequality for similar work remains high.” On pay equality alone, excluding education and health, the United States ranks 64th in the world. The ladies of Dagenham may have won their fight, but the fight continues for the rest of us today. Take, for instance, a very similar story in 1998 where Goodyear Tires pay-discriminated against a female employee. Civil law did not protect her until Obama created theLilly Ledbetter Fair Pay Act in 2007. U.S. women still only earn 77% of what a man makes for doing the same work. At the end of the day beggars can’t be choosers. If a cookie-cutter movie is made featuring women’s trials and tribulations in order to inspire the masses for 90 minutes, then so be it because movies of similar genre are few and far between, if in existence at all.

Made in Dagenham does a superb job of laying out the story and the issues and I highly recommend it to males and females alike. But it manages to cloud the relevance of the issue today, so moviegoers beware! Remind yourself that this story is merely the beginning of women’s realization that pay discrimination is immoral and that the “spoon full of sugar” approach is just a smokescreen, there is no real happy ending because women today still haven’t achieve equal pay. Rita O’Grady superbly points out that fair treatment of women, “is a right, not a privilege and that’s as it should be.” Media should inspire change in the present, not just make civil rights issues look outdated and nostalgic. Even today, equal pay and accurate representation in film are still elusive goals, but if we can take anything away from this movie it’s that change does not come without action and insistence.