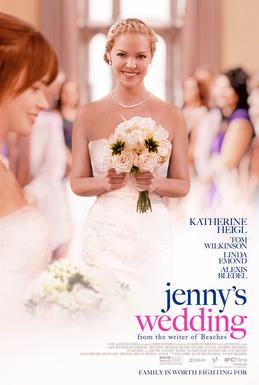 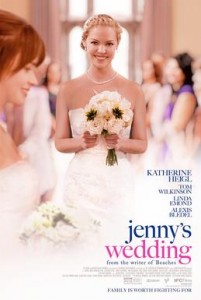 Jenny’s Wedding (2015): When I saw Katherine Heigl in yet another wedding/rom com movie, I rolled my eyes. What other type of Wedding Industrial Complex and women-are-only-valuable-if-they’re-in-a-relationship shenanigans is she getting into this time? Jenny’s Wedding, luckily, is a significant break from that overplayed crap, which, I suspect, is why Heigl and many other notable actors (Alexis Bledel, Tom Wilkinson, Grace Gummer) must have signed on. Jenny’s Wedding is actually a rare LGBT wedding movie. Though before you start throwing celebratory wedding rice for this underrepresented plot, the movie does play out like it was written and directed by a straight person who just decided yesterday to start waving a rainbow flag (Mary Agnes Donoghue) (the first part is at least true). While set in a post-marriage equality Cleveland, it’s as if the movie starts well before that. Jenny is in the proverbial “closet;” her family doesn’t know she is a lesbian and assumes her fiancé (Alexis Bledel) is just her roommate. They can’t explain her perpetual singlehood so they assume she’s having an affair with a married man (which they are surprisingly okay and non-judgmental about). When she finally reveals to her parents that she’s gay, her parents ask her to stay in the “closet” out of selfishness and shame. She quickly acquiesces to this without any real protest.

My biggest problem with the movie is whether the interactions and reactions to this coming out story was at all realistic. Jenny takes her parents rejection surprisingly well – almost too well (even her fiancé has a sort of “oh well” attitude to her future in-laws rejection of her and her future spouse). And by the end of the movie, her parents pull a 180 with little confrontation or consideration of Jenny (they’re more influenced by other similarly bigoted outsiders than their own daughter). If this isn’t realistic – is it setting a dangerous precedent of people’s expectations in these stories? Or for real life, people like Jenny’s parents, is the sugar-coated coming out movie what they need to accept marriage equality? I suppose while the movie attempts to highlight the importance of “love is love” and how to be a LGBT supporter in this post-marriage equality America, the movie couldn’t escape the real-issue subversion all too common in passive and heartfelt wedding and rom com movies.