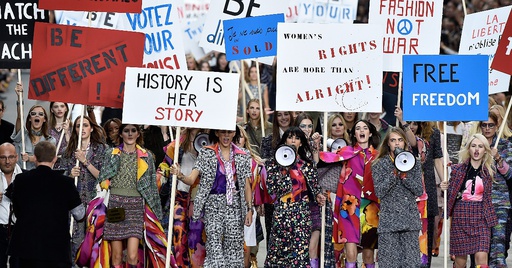 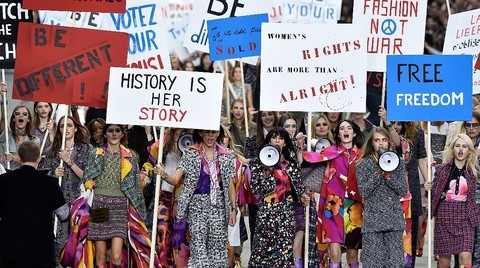 As a proud feminist, I probably naturally strut my stuff. I mean, who wouldn’t? When feminists protest it’s usually causational, like as a result of the Hobby Lobby verdict, fighting for birth control, abortion access or a fair wage. And it’s in front of government buildings or ground zero for the issue – not on the runway. 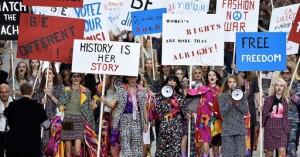 This is not to say that social protest can’t happen on the runway. Social causes can either be addressed on it, like Betsy Johnson did last week at New York fashion week. Or the fashion industry can come under its own scrutiny from outside it, especially from PETA or over healthy BMI standards. Last week, Chanel’s runway show at Paris Fashion Week proved yet again that feminism is becoming très fashionable. Joining Beyoncé, Gaga, Betsey and plenty more stylish, fashion takers is Mr. Karl Lagerfeld. Now depending on which side of feminist history you enjoy; fashion and its repressive bras are a scourge on women, pushing unrealistic body types and not enough racial or body diversity. To you fashion may be guilty of creating ad campaigns that play out unhealthy gender dynamics like a 50 shades of Gray novel. Or if you’re the Rosie the Riveter type, you see fashion as a tool to liberate women with scandalous bike-riding bloomers, pants, short skirts above the knee or boxy, hydrogenous flapper dresses. The relationship between fashion and feminism is as complicated as lace up gladiator boots. Mr. Lagerfeld’s collection culled from different waves of women’s power fashion – cue 80s boardroom power suits and shoulder pads. He ended the show with what he probably thought was a beautiful feminist pièce de résistance. Models marched and held signs with slogans like “Feminist means feminine!” (cue third-wave feminism) and “Be Your Own Stylist” (I guess this is pushing women’s autonomy, even though a fashion runway show is essentially implying what one should be wearing…). And the perfectly comprehensible message of, “Free Freedom.” Here’s the thing. I’m not one of those feminists that poops on other people’s feminist efforts just because I disagree with the tactics or message, etc. (Like, I forgive you, Taylor Swift for dabbling in the anti-feminist dark side and I understand you’re figuring it out. I can be patient.) But the whole point of the protest left me super confused. I watched these beautiful, too-skinny-for-real-life, very white models walk down the runway, supporting a cause I dearly believe in, and I was left with a lot of questions. These models are hired protestors. Do they really believe in feminism? And what exactly are they protesting against? Maybe, I’ve been too hardened by activism that I’ve forgotten that general support is equally as important as fighting injustice, but then why protest? Why not host a power summit or at least a wine night? Why not have everyday people join the models on the runway, because if we’re talking feminism we’re all in this together? What if using activist tropes like picketing, marching and chanting dilute the power of these strategies when they are sorely needed in the real world? Mr. Lagerfeld could have just as easily restaged the French Revolution with a few sign changes, which makes me think this is more like a poorly directed high school play than an actual women’s march. While my powers of feminist and art analysis still leave me at a loss, I do take some solace in this show being part of Coco Chanel’s legacy. Coco Chanel embodied feminist ideals (I have no clue if she actually called herself one though). Her business did not rely on a man or husband’s support, she was independent and strong willed in a time when few women were and when war made being so even more difficult. I want to believe Mr. Lagerfeld ended the show with the greatest of intentions. The things is intentions can be well meaning and still fall flat unfortunately. Since we are talking fashion; Mr. Lagerfeld’s theatrical protest is like receiving a pair of sox or underwear for your birthday or Christmas. Sure, these are important essentials, but given the circumstances as we’ve outlined above, it’s hard to completely understand the artistry and meaning of the gesture. True, it’s the thought that counts but there’s something eerily fishy about it all. Kinds of like he thought, feminism was the hip thing this season, like a Tickle Me Elmo or Furby, which just makes it seem more like a fickle, bandwagon tactic. Regardless, I appreciate the feminist thought Mr. Lagerfeld if you had good intentions. Just maybe next year, you can consult with non-fashion feminists on how to really curate a powerful feminist, fashion pièce de résistance. Maybe together, the relationship no longer has to be so complicated like those gladiator boots, and that would be a gift where everyone wins.