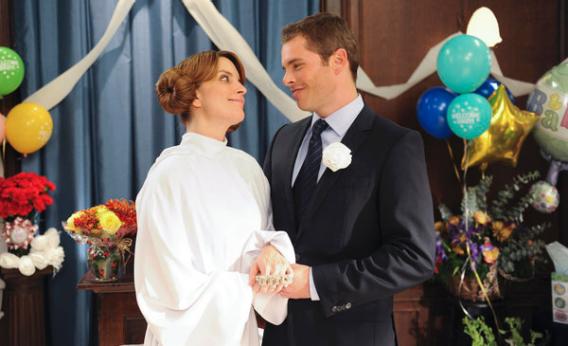 Mazel Tov, Liz Lemon! You Are A Beautiful Feminist Bride. 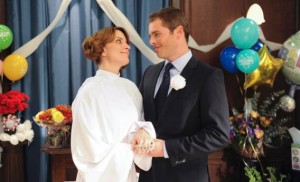 What kind of wedding does career-oriented Liz Lemon have? Well, it did not involve ham and other delicatessen treats, jorts or sun pee to toast the newlyweds. What it did involve was awesomeness served up with some midnight cheese on top and some sweet Tony Bennett on the side.

Yes, that’s right; Liz Lemon, the only person to say to marriage, “I do [not] want to go there,” walked down the aisle with live-in boyfriend Criss. Frustrated with the adoption and conception process, Liz and Criss decide to get married in a ‘no big whoop‘ city hall marriage…cuz, you know, married folks are taken more seriously as parents. If you would like to congratulate them, they are registered at Popcorn Palace.

Declaring that weddings “are just a giant industry that prey on gendered stereotypes to make adult women spend a ton of money and act like selfish children,” Liz opts to get married in just a sweatshirt and no bra in a big stand against the wedding industrial complex. It’s great to see Tina Fey bring some legitimate feminist wedding concerns to TV, especially opposite all the other ones that promote it (hello, TLC; and Bravo’s Wedding Bitches which doesn’t really exist, but if it did, I would secretly watch after the Real Housewives).

After Liz’s anti-wedding admonitions, she admitted “a tiny part of me that I hate wants to be a princess” but goes onto explain that this inclination “is the worst because its society.” Salon did not appreciate everything in the episode, “I was a little horrified by some of the particulars of last night’s episode…The takeaway of the episode was that all women … want to be princesses? Speak for yourself, Liz Lemon!” Salon seemed to miss that 30 Rock is a comedy and it makes fun of everything, including feminism. That’s what makes Liz Lemon so endearing – she can raise legitimate feminist concerns and make us snarf while laughing. And if you ask me, feminism could use some funny. Humor doesn’t negate our positions, but it might mitigate the terrible, lingering stereotypes that we are all man-hating ice queens. If we can show that we can laugh at our suffering and make a point at the same time, the more power to us.

Liz desiring to be a princess yet simultaneously hating it, is a funny dichotomy. Mostly because it’s absurdly true. In my research I come across one too many blogs and articles pondering the ultimate question – can you be both a feminist and a bride? To which I can only reply, “What the what?!” Of course you can! How can we espouse the concept of ‘we can have it all!’ and simultaneously make women chose between one side or the other?  Hasn’t feminism progressed to the point where we can admit to enjoying some of the things that our biased societal upbringing wrought on us (so long as it’s an educated decision)? Wasn’t the point of third wave feminism so that we can be both feminine and fierce?

The beauty of the episode was that Liz learned that it’s okay to be sentimental and a feminist on her wedding day; and that she doesn’t have to concede to an already imposed wedding norm. Liz ultimately found her white wedding dress and embraced the princess within, which is totally okay and still totally feminist because it was in a fashion that fit her the best, hair buns and all – Princess Leia of Star Wars. Jack quipped that, “I haven’t seen anything in the news about attitudes about marriage changing forever because of one brave woman,” but I disagree even under power clashing duress. The force is strong with Liz Lemon. For seven seasons, she’s been changing the way we think about ourselves as women and now as brides.

In the words of Dennis Duffy, Mazel Tov!

Tina Fey Pops Out Another Feminist