One of the best speeches championing for same-sex marriage

An old speech but an amazing one worth reviewing by NYC Senator Diane J. Salvino. I’m going to put 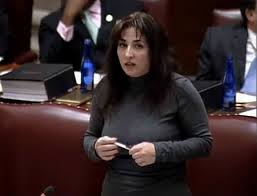 this as one of the top speech’s to protect and support gay marriage. Another great one is by Zach Wahls of Iowa. If you have a few other speech recommendations, send them my way at TheFeministBride@gmail.com. I’d love to put together an inspiring list!

We should hail Senator Diane J. Salvino not just for being one of the few 19% of women that form the United States Congress, but for her amazing speech supporting gay marriage to the New York Senate when New York was still grappling with the idea of letting gays marry. Her speech in 2009 was poignant and inspirational, but most of all it was about time someone spoke rationally, reasonably and fairly on the subject. The speech is available on YouTube, but here is a portion of the transcript.

“I was on 6th avenue in Manhattan, I was in my car, I was driving, make a left turn onto 52nd street, I was stopped at a light, I had my window open. And a young man on a pedicab stopped and stuck his head in the window of my car, which I thought was kind of strange. But he recognized the senate license plate on my car and this was right during the week that the assembly was taking up the vote earlier this year. And he said to me, ‘Excuse me, is there going to be a gay marriage vote in Albany this week’? And I said ‘Yes, the assembly’s going to take it up, but the senate probably won’t take it up any time soon, I’m not sure when.’ And he said, ‘Are you going to vote for it?’ And I said, ‘Yes I am.’ And he said, ‘Why?’ And I said, ‘Because I believe that people should be able to share their life with whomever they want and the role of government is to administer that contract that they agree to enter into.’ And he stopped and said, ‘But they’re changing the definition of marriage.’ And I said, ‘Don’t get so excited about this marriage stuff.’ I said, ‘Think about this, we just met, you and I right here at the stoplight. You stuck your head in the window of my car. Do you know tomorrow we could go to City Hall, we could apply for a marriage license, and we could get married, and nobody there will ask us about the quality of our relationship or whether we’ve been committed to each other or any of those things. They will issue that marriage license and we can get married.’ And he said, ‘Yes, that’s true.’ I said, ‘Do you think we’re ready for that kind of commitment’? And he stopped and he said, ‘I see your point.’ And that’s really what this is about. We in government don’t determine the quality or the validity of peoples’ relationships. If we did we would not issue three-quarters of the marriage licenses we do. And I know there are many people in the religious community who feel that we’re going to force this on them when in fact that is not true, we have never done that. I’m a Roman Catholic. The Catholic church has the right to deny me the sacrament of marriage if they determine the person I choose to marry is unfit or our relationship doesn’t meet their standards. City Hall does not have that right. That will not change under this bill. That will never change. Religious institutions can continue to practice discrimination with respect to the sacrament of marriage. We don’t. We shouldn’t. We should not do it for gay and lesbian couples.”

Despite her impassioned speech, lawmakers still denied the bill to give gay couples equal marriage rights. However, in 2011 the New York government came around and finally passed a Marriage Equality Bill. Speeches like hers may not make changes over night, but they certainly can plant important idea-seeds that will grow in flourish in the future.