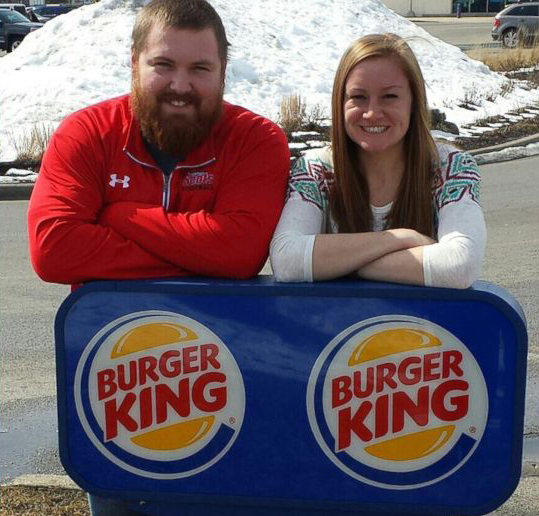 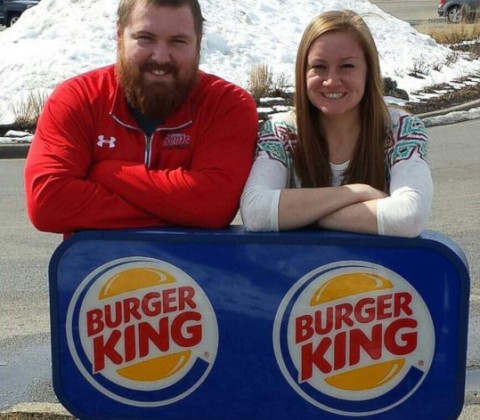 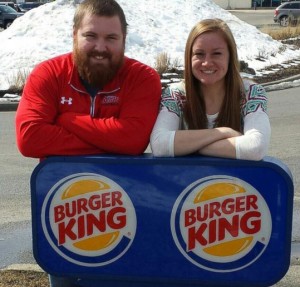 As you’ve already heard Ashley King and Joel Burger, who started as 5th grade elementary friends and ended up twenty-years later as fiancés are getting married and planning on having a Whopper© of a wedding. Their joint destiny may not have been written in the stars, but on a menu as their surnames suggested – Burger and King.

“We have yet to escape the teasing, but we have fully embraced our nickname,” Joel Burger told the Register. While people are having a good laugh with the couple over their uniquely commercial union, let’s talk about how it seems that the couple are practicing the rare neutronymics! Neutronymics is a term I coined where a married couple either retains their two surnames, incorporate both names (hyphenation or middle name replacement) or create a completely new name out of both their names. If Mr. Burger is actually adding on Ms. King’s surname, it is one of the rarest examples of men doing so.

As it stands less than 10% of women today either practice neutronymics or one-sided hyphenation (meaning as a couple, only the woman changes her name). Around 90% of women practice patronymics (taking his name) and so few men practice matronymics (taking her name) or neutronymics that their number doesn’t register on the scale at all. So it’s a pretty big deal if Mr. Burger is going for the full regal sandwich moniker. Which if he is, I think that’s amazing. Even if he wasn’t planning on it, it might be in his finance’s and frig’s best interest if the chain is looking for local spokespeople. Because by the powers of fast food, the burger chain, Burger King discovered their nuptials through the modern wedding announcement platform – Twitter. Instead of celebrating the couple by gifting them with a copyright infringement lawsuit, Burger King decided to gift them an entire wedding.

While I have strong mixed feelings about such corporate sponsorship for “one of the most important day in the couple’s life,” I can’t help but wonder what a Burger King Wedding would look like? First and foremost, the King has to reside as their officiant. If he approves of the marriage he will give his signature thumbs up, then the couple may kiss. Upon saying I do, the couple shall be crowned in BK’s customary regalia. The cocktail hour will serve mini sliders, onion rings and chicken nuggets. Instead of a swan-sculpted ice luge, a large B.K. insignia will dispense the finest of Pepsi colas and Mountain Dews for guests. The reception will start with the chain’s classic chicken Caesar salad and then be followed with a banquet of burgers piled so high it could reach the Gods. The couple will have their first dance to the classic Burger King song, “Have It Your Way” and cut into a burger-themed wedding cake designed by none other than Cake Boss. Guests, with their bellies full from Extra Long BBQ Cheeseburgers, will leave happy, especially when go home with a kid’s meal toy and their pockets full of Junior Whoppers. But most importantly the after party will feature a sacrificial Ronald McDonald effigy in order to ensure a prosperous life together and many little Kid’s meals in the couple’s future.

So why is Burger King doing all of this. For one, it’s really good press, especially after the debacle in 2005 when a lady called 911 because the store couldn’t get her order right. But maybe I’m being cynical and they just believe in a good old fashioned love story. It will be really interesting to see if the chain totally commercializes the couple’s wedding in a marketing stunt and a gross display of the wedding industrial complex or leave the couple to their own wedding design devices (their original intention was to just hand out koozies with their name and the BK logo on the back). If selling out their wedding is the cost for a man practicing neutronymics, I’m actually on board for a Whopper-themed wedding then. Sexism in name change is one of the worst sources of inequality in wedding traditions so I say take the small wins even if it’s from the dollar menu.