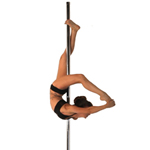 The Unrecognized Athleticism of the Stripper Pole

Some of us went to see The Thunder Down Under at the Excalibur and some instead went to go see…John Stewart. Whatever floats your sexy boat. Another night many of us went to see Cirque du Soleil’s Zumanity. Here is my best way to describe Zumanity – half Vaudeville humor, half erotica show with the typical Cirque du Soleil acrobatics but with stripper poles. We all enjoyed the show, it was tastefully, well balanced between the love scenes, the star crossed lover story lines, the flying trapeze boobies and the sexy cheerleader who was twirled around by the grip of her teeth. However, we were most impressed with the pole dancing moves. They literally defied gravity.

There’s a lot of feminist rhetoric that lambasts stripping and the pole. It’s accused of objectifying women, subjecting them to the male gaze and promotes a lot of unhealthy behaviors and supports other sex industries. And those arguments are certainly valid. There’s also the side that defends it for giving bodily autonomy to women. After all, now the regular shmoe from suburban moms to college coeds can innocently get a Groupon for a pole dancing class. There they can learn to feel confident about their curves.

Whatever side of the argument you fall one, one thing I hope we can agree on is the amazing physical strength and agility it takes to pull off some of these pole moves. Pole Dance Dictionary shows off moves that require real athleticism. The upper body and core strength, not to mention flexibility and balance these moves require are something I know I can’t muster even at my fittest.

Perhaps the audience and intention of the performance makes the biggest difference between the pole being exploitative or artistic. While Zumanity was extremely sexual, the athleticism of the pole moves usurped any sexual exploitation that might be interpreted in the performance. Take for instance the classic movie, Flashdance. The main character Alex brings such artistry to her nightly performances that many forget that she is technically an exotic dancer. The combination of athleticism and sexuality of the body, the tools and the performance really creates an art form, it is not just about the body. While I don’t expect pole moves to become the next Olympic sport (but who wouldn’t watch that), perhaps in this athletic context, it deserves some respect?