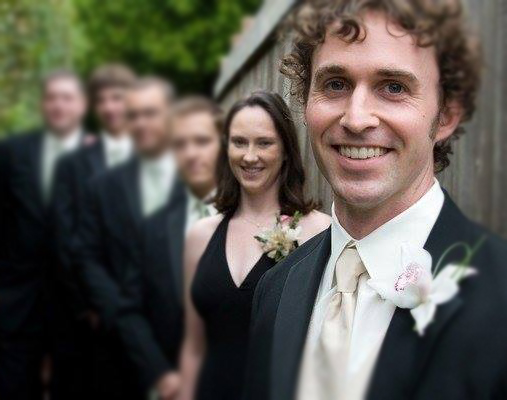 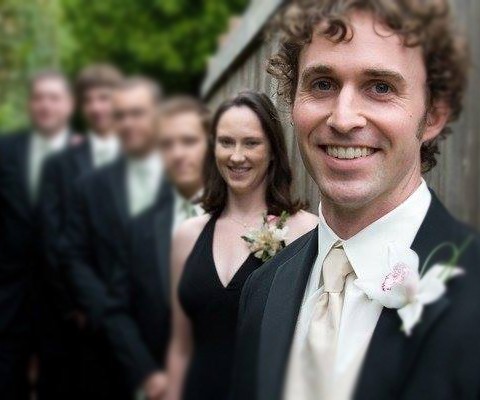 Where Are All The Bridesmen and Groomswomen? 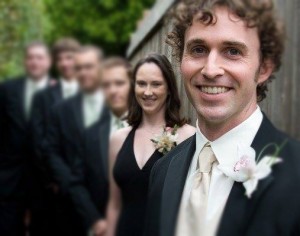 Dominique as a groomswoman next to her best friend, the groom

Ladies, if your best friend is your brother, or that awkward college guy who naively explained that Beirut is a place, not a beer game, or your male coworker who loves afternoon Hot Pockets almost just as much as you and you’re getting married to…someone else, why not put that best friend in your wedding party?

Gentlemen, if your best friend is your sister, or cousin who encouraged you to embrace your affinity for knitting infinity scarves, or your former high school prom date who danced so awkwardly to House of Pain’s Jump Around that you found a platonic, kindred spirit and you are also marrying someone else? Then you, too, should feel free to put them in your wedding party.

I honestly don’t know why I don’t see more bridesmen or groomswomen. I could speculate that it’s this old school, sexist mindset that people in relationships can’t keep friends of the opposite sex or that friendships of the opposite sex eventually expire if they don’t make it to the bedroom. I disagree, though. Most of my closest and longest friendships are with guys. They were too awesome to let go, and the best part, they eventually ended up with other people who were equally as awesome. And now – double friends! And besides, having a partner that supports you means he or she should embrace all your types of friends.

Another reason why we may rarely see gender-diverse wedding parties is that most wedding party activities and responsibilities are gendered. For example, the Maid of Honor Best Lady typically hosts the bridal shower, which, despite being “for the couple” is all about women giving the bride Tupperware like it’s 1950, as if the only people still allowed in the kitchen were…women. Not only is this unfair to women who aren’t comfortable in the kitchen, but it excludes men who might appreciate a good set of copper-bottomed pans.

Or for another example, if men feel awkward bringing a woman to a men’s strip club or vice versa, it means that either the venue and activities are not kosher for anyone or that people might need to broaden their idea of inclusivity. Even the terms bridesmaid and groomsman are unfairly gendered—“maid” is a virgin unmarried women or domestic servant; in ancient times from when a “groomsman” watched the horses while his friend rape that maiden to consummate “the marriage.” Nowadays both jobs are exactly the same, but the terms come with separate sordid social histories and semantics that are a real killjoy. I’m all for a girl’s or boy’s night out, but not if it means excluding someone important in your life just because of their sex.

As a bride trying to navigate tradition and feminism, it never occurred to me earlier in my FB research to ask my best friend from college (who’s a guy) to be in my wedding party. He was important to me and I wanted to include him in some way. Our wedding parties were already symmetrical, so we asked him to officiate the wedding. It was a nice consolation prize to be married by my best friend and not a stranger, but had I been aware of how gendered and exclusive I was subconsciously being, he could have participated in a much more direct and constant way and not just once at the ceremony.

Now, I know that’s an option that should be exercised. When a bride or groom are facing the old-fashioned wedding customs that divide up the sexes like a middle school dance? My advice to them is, “Fuck ‘em!” (though not literally cuz that would be awkward, you’re friends and that would be cheating). But fuck the unspoken, sexist tradition that says bridesmaids (aka best ladies) have to be women and groomsmen must be men. I 100% guarantee that everything will be more meaningful when you have your best friend by your side (and you’ll get a little ego boost knowing you did what’s right and not what’s convention).

Sure, you might have to reinvent other gendered wedding customs, like buying matching dresses, but it will be worth it. This was the case for Dominique, a high school friend, who is the only woman I’ve known to date to fulfill the role of groomswoman. (The groom was also a high school friend. Knowing how close they were, anyone would tell you making Dominique a groomswoman was a natural no brainer.) She reflects, “I couldn’t have been happier to be included in my best friend’s special day. The only thing I worried about was making sure that my attire looked appropriate for what the rest of the wedding party was wearing. I should have asked the bride for advice instead of the groom whose instructions were, “just wear a black dress…or a green one.”” The plus side to re-imagining or creating new traditions is that you might just inspire more parity by realizing that no one has to buy and wear expensive high heels or that men should be attending wedding showers too. Dominique wore black to the wedding; her presence and matching attire on the groom’s side showed she was one-of-the-guys, but importantly, much more too.

At a recent Colorado bachelorette party for a feminist bride friend, one partygoer was a male friend from college. I think at first he felt a little awkward since he associated bachelorettes as “just for the girls,” and he was the odd duck out. Eventually, that façade wore off as he realized that the weekend was about being with friends and celebrating one in particular—we just all happened to be women. When strangers asked how he felt about being the only dude in a bachelorette party, he sincerely replied, “I’m just lucky like that.”

So drop that afternoon Hot Pocket right now and say, “screw convention!” and go ask your best friend with a different appendage to stand by your side on your wedding day! It will be worth it in more ways than you can imagine.