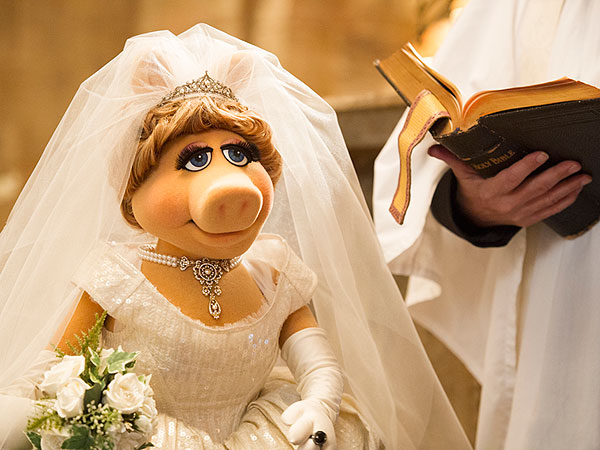 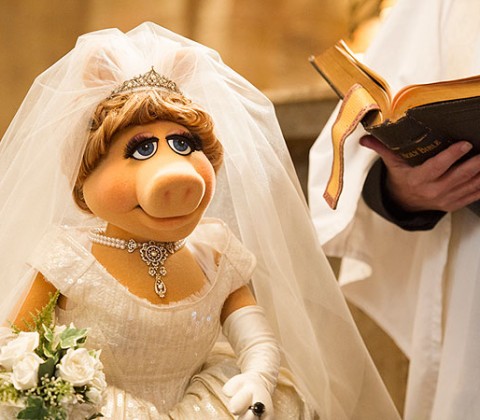 Why is Miss Piggy Obsessed with Marriage? 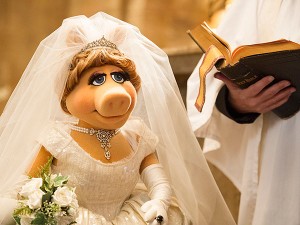 The great romances of our time have always unfolded like a Greek tragedy, a Shakespearian play, a Dickinson novel or sometimes a delicious telenovela. Heloise and Abelard, Romeo and Juliet, Elizabeth and Mr. Darcy, Kennedy and Monroe, Sam and Diane, Ross and Rachel, Franco and Rogen, there’s a long list of would-be lovers but none are as memorable, iconic, romantically complicated and plushy as Miss Piggy and Kermit the Frog.

Kermit will lament that, “it’s not easy being green;” but Miss Piggy embodies how difficult it is, loving and wanting someone – who is green. For the last 30-plus years, Miss Piggy has chased, bamboozled, coerced and sometimes karate-chopped Kermit towards marital submission. However, the slippery amphibian has continuously dodged and spurned her advances. Why after so many years of cat and mouse is marriage Miss Piggy’s pièce de résistance?

It’s clear that this frog makes this pig’s bacon sizzle, but is the allure of those long legs really worth it? Or it is the idea of marriage that swoons this swine? It’s quite possible that Jim Henson intended for Miss Piggy to be a modern zeitgeist for marriage-hungry, single women and inadvertently created the first bridezilla. Her lust for the frog and marital bliss started in the late 70s, but it most likely cemented itself after the nuptials of Charles and Diana. If we took a look at Miss Piggy’s Pinterest board today it would be covered in wedding pins, glamour shots and sexy frog pin ups. This could simply be the case of a pig trapped in the industrial wedding complex.

What if the answer is a lot darker though? What if this obsession is nothing more than the beginning trappings of a fatal attraction? We have, after all, watched her hunt down a thief in Central Park and stalk Kermit. Maybe she’s taking a page from Jennifer Aniston’s PR book and using her unrequited love too to land on page six? After all Miss Piggy is constantly seeking fame, fortune and glamour to a level that would challenge any Kardashian. Or is it just the misplaced energies of a career-oriented and high-achieving pig? She’s hard-working and doesn’t take no for an answer. She’s so independently minded one could argue she embodies third-wave feminist ideals! For a pig, who is determined to get her own way, is this ongoing romedy simply a function of go-getter pride or wanting what one can’t have?

Joe Hennes of ToughPigs.com gives some insight, “[In Muppets Most Wanted]…I wasn’t expecting Miss Piggy’s adverse reaction to marriage once Constantine proposed. She finally got what she wanted, but…it wasn’t actually what she wanted, which is a totally complicated notion.”

If saying, “I do” doesn’t satisfy her; maybe it’s her stubbornness that wants to disprove the stereotype that men (and frogs) don’t desire marriage. She knows deep down that Kermit cares and is committed to her. His cold flippers might just be part of a macho-wedding complex, and her manic thirst for marriage a response to it. As Hennes elucidates, “Piggy won’t be happy getting married, and Kermit won’t be happy staying single, but they’re a great couple while in that middle ground.”

ToughPigs co-owner, Ryan Roe takes a practical Kermit-esque approach to the unending beleaguered romance. “As far as why Kermit is more hesitant, and why Piggy remains undeterred, the real-world answer is because – it’s funny.  It’s kind of like why the coyote keeps chasing the roadrunner, when he could just order a sandwich somewhere… If Kermit gives in and marries Piggy, or if Piggy gives up and stops trying to win him over, there’s no more tension, and there goes the comedy of their relationship.” Could it be that this decades long “will they/won’t they” plot and marital zealousness is not a function of Piggy and Kermit’s neurosis, but a Hollywood PR stunt meant to build box office results?

Miss Piggy and Kermit’s romantic plot parallel Barbie and Ken’s. As iconic couples, they wield a Brangelina-type power, but even the same story told repeatedly gets wearisome. To spark some drama into the couple, Henson was planning a “Pig of the Nineties” campaign announcing the couple’s official split and Piggy’s independence. (Mattel pulled a similar stunt announcing Ken and Barbie’s split in 2004. They reunited in 2011 with the help of a Facebook status update.) The Muppet campaign never came to fruition after Henson’s untimely passing, but if Piggy really loved Kermit (and vice versa) she would not sacrifice her love for a little more popularity. Unfortunately, we will never know, which is too bad because I would really like to see Miss Piggy dating someone else like Ron Swanson, somebody who would really appreciate her for what she is. The would-be campaign makes me wonder though, is Piggy’s obsession with marriage catapulted by our own fascination in her complicated office romance?

Miss Piggy’s obsession with marriage is most likely the result of her (and other people) not letting go of a dream that went stale a long time ago. She’s like the perpetual romantic underdog that we all relate to in some little way so we can’t help rooting for her and her love life. However, like other famous couples, Ike and Tina, Stefani and Tony Kanal, Poehler and Arnett, maybe, they too, are stronger and more creative apart? It’s become clear that we only see her value in the relationship she has (or can’t get) with Kermit; and that might not be fair to Piggy, nor women in general. When she cut herself from the old ball and chain in Muppets Most Wanted, she rose to the ranks of plus-size editor for French Vogue. Imagine what else she could do if she embraced her powerful single self or broke off from what has been holding her back? This is a pig with a lot of potential, and it’s time we all – her fans, Kermit and herself, let her fly.