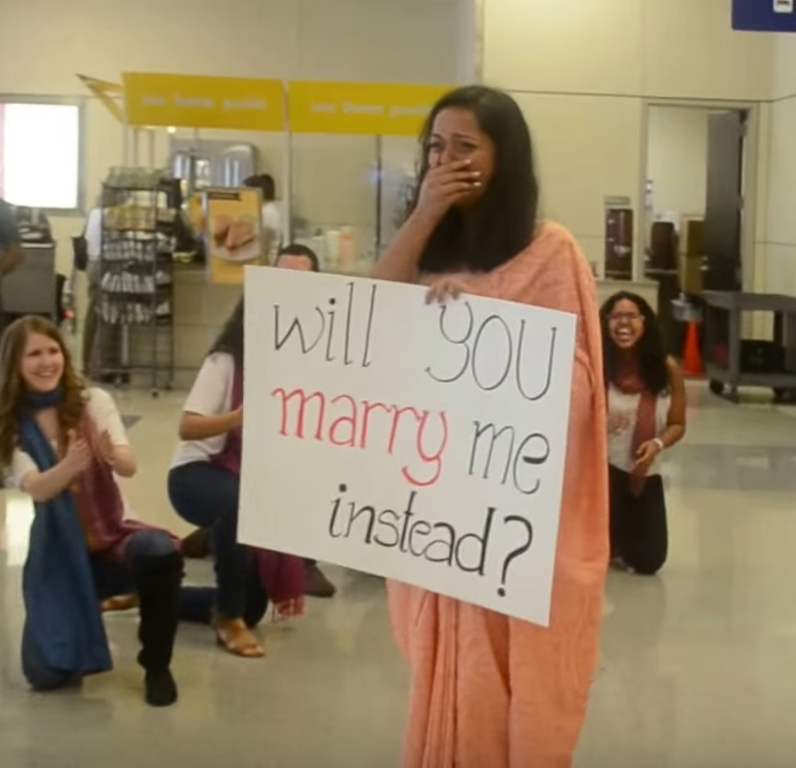 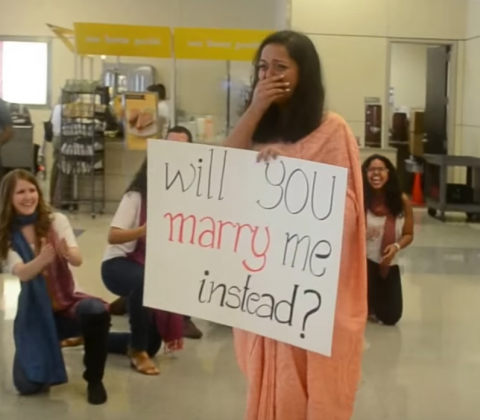 How She Proposed to Him: Love Actually in Action 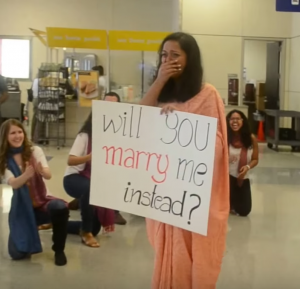 The woman-led proposal is as rare as a unicorn, but no less magical. Restrictive gender norms dictate that it’s the “man’s job to propose,” to which The Feminist Bride says patriarch-cock! This is probably no surprise to most, but it might be surprising to learn what makes this stereotype so is a result of the wage gap, chivalry (benevolent sexism), the wedding industrial complex (for-profit companies sold this idea through ring culture) and the media and our community (who reinforce this idea). This isn’t the norm because men are the only ones capable of proposing. Women are perfectly capable of getting down on one knee too. Sadly, through social conditioning and the fear of operating outside traditional gender norms, few actually do. So when there’s a great example of one, I want to share it!

Varsha Bhargava and her intersectional group of friends helped her propose to her boyfriend, Booj as he arrived into baggage claim. The soon-to-be-bride seems to be inspired by the movie Love Actually (cue airport and signage), which works perfectly as it’s clear she’s moved beyond words and emotions. Even more perfect is his reaction.

It’s important people see that a woman can boldly take this leap of faith too and that a man can accept this heartfelt gesture with love and sincerity. No love is lost just because the gender roles are reversed, if it is I worry about the strength of the couple then. The reality is woman-led proposals are just as beautiful as a guy proposing because, at the end of the day, its about the love and gesture of commitment. The world just needs to see more woman-led proposals to prove this in order for them to become equal opportunity occasions. Congrats to Varsha and Booj, but particularly to Booj for finding such a trailblazer and strong, confident woman.

airport proposal, Can a woman propose to a man?, getting down on one knee, love actually, Varsha Bhargava, women proposals