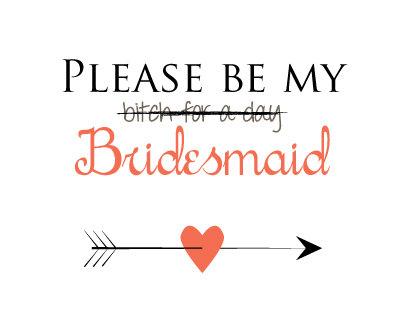 Pst! Bridesmaids Are Not Your Personal Maids 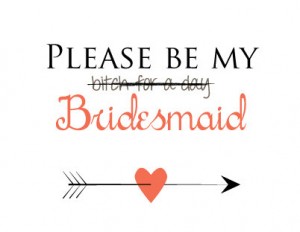 What it means to be a bridesmaid these days has run amuck. Once upon an ancient to Victorian time, a bridesmaid’s main job was to dress like the bride as a divergence to evil demons who wished to dispel bad luck on the bride (think how Pippa Middleton diverted everyone’s attention). Nowadays, the duties of a bridesmaid are endless. It includes being a shoulder to cry on, party planner, envelope licker, penis paraphernalia collector, moral compass, yes-woman, Mother of the Bride interference runner, 24/7 on-call support, mind reader, errand girl, attention giver and wine supplier at every occasion. And to boot bridesmaids get to buy their boss multiple presents, spend hundreds to thousands of dollars on travel and buy their own work uniform that they will wear once.

Many will defend being a bridesmaid as a coveted position of high esteem, like CEO or MTV VJ. Some might argue that this is what best friends are supposed to do – ask strange men to pay a dollar to suck a penis pop off the bride. The bride might claim that her bridesmaids had just as much fun lifting her layers of tulle up so she could take a poop. (Touché.) And others find solace in the idea that one day the tables will be turned so they can relish in being the demanding bride with her locked-in entourage of minions. It’s a perpetual cycle of crinoline and modern servitude.

It’s quite possible that Anne Hathaway had it easier in The Devil Wears Prada, but that doesn’t have to be the case anymore.

If bridesmaids are the bride’s best friends, why give them tasks as a way to prove their loyalty and love? This is what being a bridesmaid today has come down to. If they fail their responsibilities, like not using their powers of sight to foresee and warn the bride that baring her bum in what seems like a cute, trendy photo will end up on the Internet and affect her future job prospects is a major faux pas. The bride is then left sincerely questioning the friendship regardless of previous years of loyalty and taking the rap for stealing booze from the bride’s parents’ liquor cabinet in high school. A bridesmaid’s performance should not be taken as a test of friendship nor she should be held to unreasonable standards outside the norm. If a friend has never cared about fashion before, a bride can’t expect her to share the same enthusiasm over the bridal gown or bridesmaid dresses.

By comparison, groomsmen have it much easier. They merely need to show up to the bachelor party and wedding on time, maybe golf earlier in the day, rent a tuxedo and not hire a stripper that looks like the groom’s mom. They are not subjected to the same mental, physical and financial gauntlets that bridesmaids experience. This isn’t American Gladiators or Ninja Warrior after all, unless that’s the wedding’s theme to which then I can only wish everyone good luck. Groomsmen are never asked if they’re still friends with the groom after the wedding because tensions and demands ran high; that’s how easy they have it.

Brides are now independent adults with involved fiancés. Both are perfectly capable of handling the rigors of planning party alone. Expecting bridesmaids to become the next Franck Eggelhoffer stems from a time when weddings were considered “women’s work.” Back then brides had little to no money (thanks wage gap) and relied on their parents and bridesmaids to help plan and pay for a wedding. None of this applies to today! Nowadays, bridesmaids have better things to do like solving the climate crisis as engineers, rebalancing America’s financial sector alongside Elizabeth Warren, penning the next best psychological thriller with an enigmatic female lead and writing women’s studies dissertations called Baby Got Back 1992-2014: Understanding the Epistemology and American Colonialism of Butts from Sir Mix A Lot to Kim Kardashian. Bridesmaids can no longer be held to unreasonable standards of friendship and bridal subjugation like helping the bride into Spanx.

I’ve run the gamut of bridesmaid requirements from intense Bridezillas to hands-off brides. I didn’t really survive the first two who required me to be a yes-woman or intense attention-giver, to which I am neither, even on special occasions. The bride who expected little of me other than the occasional check in and sounding board was fucking great. The only snafu to the occasion was what I wore to the wedding. Without the requirement of a bridesmaid uniform, I was left to my own devices, which meant that I severely underestimated how cold Wisconsin gets in October and overestimated how formal an Amish barn wedding is. To keep warm, I ended up wearing a prima donna figure skating ensemble as if it were straight out of Blades of Glory.

Freeing bridesmaids from their heavy workloads and the mental mind traps that brides often put them in, I guarantee, will result in stronger friendships and more enthusiastic partying (at some point in the Wisconsin wedding I slid across the barn dance floor on two dollar bills as if I was Kevin Bacon in Footloose cuz you can’t fake feeling footloose and fancy-free). By liberating bridesmaids from unrealistic job requirements, being there for the bride will become more of a willing option than an obligation. Bridesmaids will feel less like resented, over-taxed workhorses and more like partners in crime when they steal a road sign that says Cocksburn Drive at 4am during the bachelorette party. And the extra benefit to bridesmaid reform is more equality between groomsmen and bridesmaids, which removes the crappy stereotype that weddings are feminine or just for women. Doesn’t all of that sound like a job that every woman would be really proud to have then?

anne hathaway, bad bosses, bridesmaid duties, Bridesmaids, devil wears prada, do bridesmaids have to buy their own dress, Elizabeth Warren, groomsmen duties, maid of honor, traditions, what does it mean to be a bridesmaid