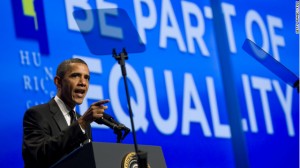 he supports same-sex marriage. Prior to this announcement, he limited his belief system to civil unions based on his own religion’s edict that marriage was only for men and women. Regardless of his new personal beliefs he still believes the legality of same-sex marriage should be dictated on the state level. I could find no information as to whether this would prompt him to change the federal policy which still doesn’t recognize legal same-sex marriages from the seven states that allow it.

The groundbreaking interview will air tonight on ABC’s “World News With Diane Sawyer” and “Nightline.”

In an interview clip below, Obama explains how his personal views changed as he interacted with his own daughters, family members, staff members and neighbors.

Obama’s announcement comes shortly after his VP, Joe Biden publicly announced his own support for gay marriage. Though while Biden’s eagerness may have accelerated Obama’s own announcement (it seems he was going to “come out” in coordination with some campaigning efforts), it seems Obama is motivated by setting a good example for his own daughters.

“There have been times where Michelle and I have been sitting around the dinner table and we’re talking about their friends and their parents and Malia and Sasha, it wouldn’t dawn on them that somehow their friends’ parents would be treated differently. It doesn’t make sense to them and, frankly, that’s the kind of thing that prompts a change in perspective.”

This is quite interesting given that this announcement will likely make him wildly unpopular amongst conservatives, red states, swing voters and the African American population according to the ABC news article. Just yesterday, in North Carolina, voters overwhelmingly approved a constitutional ban on gay marriage. Obama carried North Carolina in 2008, him doing so again in 2012 is highly questionable.

Obama, at a crucial moment in his political career, is finally abandoning the politically safe position on gay marriage, and putting himself out there by defending his consituents’ right to equality. Republican Presidential Candidate Mitt Romney opposes gay marriage. (Click here if you’d like to hear Romney’s Sr. Advisor, Ed Gillespie speak on Romeny’s position.)