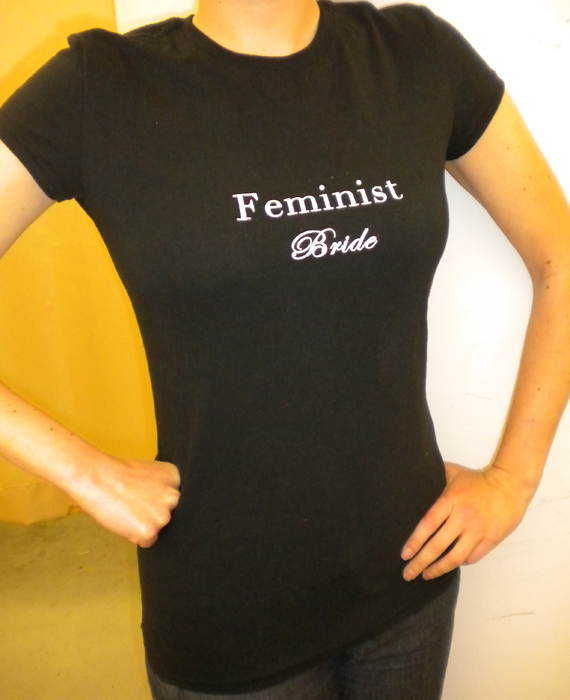 When I started The Feminist Bride website, I would get two responses: an “oh boy!” with an 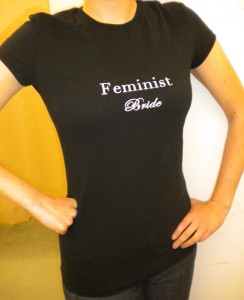 eye roll because they were expecting a one-sided soap box conversation; and a “why are you bothering to get married then?” ignoring the fact that feminists, too, fall in love. I had even debated back and forth on whether to even use the “f” word as the blog’s namesake. Five years ago, the acceptance of the word was a lot more hostile.

Today, it seems the fire most people associate with feminism has warmed people up to it. According to Ms. Magazine, the number of women calling themselves feminists increased from 50 percent in 2006 to 68 percent in 2012. The New York Times came out with an article asking, Who Is a Feminist Now? looking at the change in attitudes (both ways) among celebrities.

In an Elle article, Amy Poehler, 42, said, “Some big actors and musicians feel like they have to speak to their audience and that word is confusing to their audience. But I don’t get it. That’s like someone being like, ‘I don’t really believe in cars, but I drive one every day and I love that it gets me places and makes life so much easier and faster and I don’t know what I would do without it.’ ”

I highly recommend reading the article. It’s both a great indicator of change and an embrace of the word, but also a sobering account of how much feminism also needs to be understood better still.

I may be biased because I was (and am still) obsessed with The Goonies and love Raising Hope, but I think Martha Plimpton, 43, said it best, “We’re going to have to insist on correcting bigotry as it happens, in real time. And fear of women’s equality, or the diminishment of it, is a kind of bigotry. I think it’s important to remove the stigma associated with women’s equality, and as such, yes, normalizing the word ‘feminist’ and making sure people know what it means is incredibly important, whether we’re talking to celebrities or anyone.”

As Plimpton revealed there’s still a lot of initial bias when people hear the “f” word, which means it definitely deserves a second consideration before being discarded. For the people out there still thinking about it, since embracing it whole-heartedly, feminism has really given me some amazing gumption and sense of self that I never knew I needed or already possessed. While I may actually be on that soapbox, it’s important for folks to know that I’ve got some awesome company up here, both men and women. And there’s plenty room for more friends. The work laid out ahead of us is hard, but the benefits are great and we want everyone to enjoy them.

To read more about feminism and linguistics:

Bossy, Bitch, C*nt, Oh My! A look at women’s war on words

Pet Names Are for Pets