I created this ‘Name Change Cultural Spectrum’ for a lecture I gave at Tufts University this spring. I wanted people to understand where their decisions stand in the broader context of equality. For example, a lot of women who retain their surname but also incorporate their new spouse’s name through hyphenation will defend their decision as being progressive or feminist or seemingly more about equality. If you look on the spectrum, that one-sided name change is not as based on equality as we might like to think, especially since men typically do not join women in this one-sided hyphenation.

Also to show that existing name change culture does not encourage equality, I had to invent the term Neutronymics. Neutronymics is the adoption of a new name or combination of names created using the names of married individuals or the retention of separate surnames. It is meant to be a solution to those wishing to participate in neither patronymics nor matronymics and to increase name equality. Mutual hyphenation, the Scrabble Name Game and Surname Retention are all options people are aware of, but had never been grouped before or labeled. Labeling it gives it legitimacy and really puts into perspective the other options that favor one sex over another.

So when it comes time for you to get married and you’re not sure if you’re making the right decision that honors yourself and/or your partner – take a look at the Name Change Culture Spectrum. See where your decision places on the map and you’ll get a better sense as to whether you are helping to buck the dominating patriarchy, are alone in your name change decisions or are making a healthy decision that really promotes equality in your relationship and teaches women to value their name too. And if you’re a lady getting married, don’t forget to make the groom put in the same type of name change consideration you are putting in yourself! 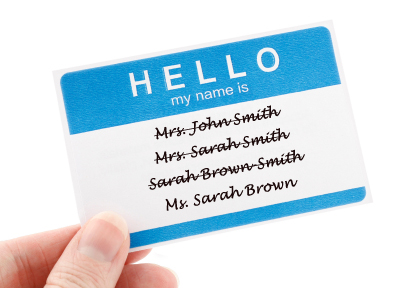 Before you get excited about becoming the next Mrs. John Smith, beware! There’s a sordid history to this cultural practice and severe modern implications as to how women are contributing to their own marginalization.

The video is a lecture I gave at the Tufts University Women’s Center ‘Beyond the Classroom’ symposium. It explains the history of why women take men’s name upon marriage, dives into its modern relevancy and issues and offers solutions for what women and men can do to practice the art of name change with more egalitarianism. (I’ll slowly be posting the name change spectrum and video transcript too!)

If you’re interested in more information about patronymics and matronymics and general name change here are a few additional Feminist Bride links and sources: