Everyone’s favorite breakfast shop and jeweler, Tiffany & Co. has just released a new engagement ring ad, “Will you?” featuring a real life same-sex couple. Like an engagement, there’s plenty of reason to celebrate when a company diversifies its ad campaigns to include more than just white heterosexuals. J. Crew, The Gap, JC Penny and Ray-Ban are just a few of the companies that are starting to cater to the LGBT market. However, before we pop that champagne there’s still plenty to consider.

To start, most people don’t realize that the engagement ring is actually consumer culture and not a tradition shaped over time by social culture (for the record, the wedding band is and dates back 2,000 years). Including LGBTs into ad campaigns is a great feat for media diversity and the gay community, but it does not mean this new media comes without its own flaws. When it comes to weddings, for one, the LGBT community now has to contend with the gender and consumer issues of the Wedding Industrial Complex (WIC). 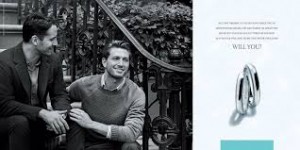 Everything Americans know and feel about the engagement ring from the two-months salary rule to the four Cs was designed in a for-profit boardroom, namely De Beers Jewelry and N.W. Ayer Advertising Co.’s in the 1930s and 40s. An engagement ring’s symbol of eternal love is merely the product of a well-designed marketing campaign that told viewers they could buy the feeling of forever – that’s the WIC.

And it’s not just how to buy the engagement ring, but also for whom these rights of passage and accoutrements should be for – namely heterosexuals. Superficially, the Tiffany’s ad can seem like its breaking new barriers by expanding the industry’s accepted target audience, but historical context is key. The WIC has set up very specific gender roles from which non-heterosexuals have been traditionally excluded.

It was De Beers and N.W. Ayers, who decided that only men should propose with a diamond ring to only women as part of chivalry and of course, Adam descendant’s larger bank account (thanks wage gap). This marketing campaign helped cement decades of chivalry (or benevolent sexism) from which feminists have been trying to free brides or at least, within it, create more equality. By depicting men, the Tiffany’s ad maintains proposing as a male-oriented task. How much goodwill can the ad create when it also preserves a patriarchal precedent that’s seeped in sexism?

If Tiffany’s was really trying to be progressive, why not depict lesbians instead? Like the other companies, they, too, featured men first. There’s a historical precedent that in some societies gay relationships are much more accepted than lesbian ones, this heralds all the way back to ancient Roman times. This should come as no surprise, as the JC Penny ads that featured Ellen DeGeneres and lesbian families are the only ones to incite a homophobic protest courtesy of One Million Moms. Ads that feature more diversity are great, but gay men don’t and shouldn’t represent everyone in the LGBT community.

Missing from the Tiffany’s ad are the ‘L,’ ‘B’ and ‘T’ of LGBT. Kat Callahan of ROYGIV put it well, “…there’s still too little representation out there. This is especially true when LGBT+ (and especially trans people) are still struggling to represent themselves as models, actors, etc. rather than being played by straight/cisgender talent.” In other words Tiffany & Co., kudos for using real gay men, but one same-sex ad does not fit all same-sex couple types. The identity politics of advertising are not the only cause for the ad’s limited diversity though.

From a business perspective, one would assume Tiffany’s ad would want to feature two women first – two diamond rings means double the profit for the company. So why feature two men instead? First, since men are the proposer and women are not, why market to an audience [women] who historically do not purchase engagement rings? Secondly, the female-proposal opportunity has been sidestepped by the industry before. In 1956, a man presented ‘acceptance’ rings’ to the engagement ring industry. Women would present this ring as a sign of her acceptance after the man proposed to her. Despite the potential to increase profits, jewelers decided that the hardest substance in the world was “too feminine” for men and passed on men’s diamond engagement rings. This omission meant also ignoring the chance for women to become more active in the proposal process. It should come as no surprise then that the engagement rings in the Tiffany’s ad had no diamonds and, were in fact, just wedding bands.

With Tiffany’s portrayal of wedding bands as an engagement ring for men and diamond rings for women, the ad perpetuates gendered industry standards and makes it’s pro-same-sex marriage message partially superficial. For example, if the depiction of a gay couple entices men to shop at the retailer, they might be disappointed at the customer service online or at least what they see. Tiffany’s online engagement section is still sorely and exclusively heterosexual. It features only hetero-couples and [women’s] diamond engagement rings; not the bands the same-sex engagement ad promotes. The ad’s “engagement rings” are only in the separate wedding section. Does this mean that the ad is merely a bandwagon trend placating to a new emerging market or a sincere gesture?

Time will only tell if this ad is a one-time novelty or part of a more extensive campaign of a truly pro-LGBT company. The ad is definitely evidence that advertising, especially in such a historically heterosexual and patriarchal industry, is taking positive and more-inclusive steps forward. However, one ad does not cure an unfairly gendered and sexist industry overnight. And Tiffany’s current ad needs to be part of a larger campaign with more LGBT diversity that’s actually integrated into the company’s website experience. So is there real cause to celebrate the “Will you?” ad? Eliza Brooke of Fashionista perfectly clarified that the success of these types of ads is when it is, “…a normalized part of marketing,” and not something to be celebrated for its uniqueness. So for now, perhaps celebrate with only cheap champagne and save the good Tiffany’s crystal ware for when the company and the industry really deserve it.