Take your bachelorette party to the next level with a little help from our overseas sisters, the British. Yes, with their pomp and circumstance our sisters know how to throw down both a scone and a party, especially when it comes to their hen parties. Hen parties are the equivalent of bachelorette parties in the US and they like to get all dolled up in fancy dress (that’s British for costume). Costumes are a great way to unite the party especially if there’s a common theme and antics. However, in the age of women’s Halloween costumes being a sexist sexy version of anything, it’s good to keep in mind a few feminist rules. The first is that, despite the conversations around sexy costumes that objectify women and invite the male gaze (though it is a very valid point to consider), sexy can be feminist. Be as sexy as you want, just make sure that the depth and importance of the costume isn’t as short as the skirt it comes in. And it’s important to note that not sexy is also feminist. Dress up as a cat all you want, there’s no reason it has to be a sexy cat. Second, don’t appropriate cultures, religions, races, etc…well, inappropriately, don’t treat them as points of ironic humor. Respect is key. Third, skip the costumes the fetishizes something inappropriate, like, violence or being underaged. Fourth, skip the costumes that mock anybody or anything, you never know who’s feelings you’d be hurting. Paying homage is key. And fifth, when someone has a question about your costume make sure you have a memorized and rehearsed feminist explanation for it (cuz you’re likely to be bladdered by then (that’s British for drunk)) so they can get a free feminist education from you. Overall, as a general, feminist rule of thumb, when it comes to picking a costume: you do you, but do it with thoughtfulness. So here are just a few feminist AF costume ideas for bachelorette or hen party (or, heck, halloween). 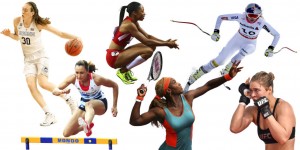 SPORTS & ICONS: This is a great option because it can offer diverse, more intersectional options for all partygoers from feminist tennis icon Billie Jean to the Williams sisters. Kick off the festivities as Abbie Wombach or Misty Copeland or jump into action as Simone Biles or Kristi Yamagushi. (Being from Boston, I, personally, have been thinking about paying homage to Kathrine Switzer, the first women to run the Boston Marathon in 1967, who attacked by men believing the race was meant for men only.) It’s about honoring great athletes who inspire and empower women and celebrating Title IX. For Halloween, I’ve dressed as a Rockford Peach because the movie A League of Their Own is a major feminist point of influence for me. While I was a little bothered by the whole “dirt in the skirt” thing, I felt so empowered in the uniform. And apparently so did many of the women I ran into who would stop to high five me and share what a similar influence the movie had on them. Full disclosure, I’m totally biased to this sports icon costume, so if you can convince your b-party to all wear them too, at least play a game of baseball or softball before you hit the bars! Also, be ready for men to yell “there’s no crying in baseball” at you, just be ready to yell back “mule” or “nag.”

SCOTUS: While I’d love to see just a sea of Ruth Bader Ginsburgs running around in their lace jabots, there are certainly other badass women Supreme court justices to dress as. What’s powerful about this idea is that it shows that there’s no reason the highest court in America can’t be all women; after all the Supreme Court was all men for 180 years. Notorious RBG is famous for saying “…when I’m sometimes asked when will there be enough [women on the Supreme Court]? And I say when there are nine, people are shocked. But there’d been nine men, and nobody’s ever raised a question about that.”

GOLDEN GIRLS: Cuz why the fuck not? They are awesome, sassy, grown women, who know what they want, which is cheesecake after midnight.

SUPERHEROES: There’s two ways this could go: dress as commercial comic book heroes or dress as your personal hero that’s deep inside you. If you go with the former, be mindful of fulfilling the what’s called the “fighting fuck toy (FFT)” (Miss Representation, 2011). The FFT is the idea that women can be strong, powerful and aggressive, so long as they are sexy and fuckable. So if you go this route, be mindful of point #1.

ROSIE THE RIVETER: So there’s controversy as to whether Rosie the Riveter is, in fact, properly feminist. The article by Rebecca Winson brings up some valid points as to why it’s not, but there’s also room to argue that the icon has since gone from patriarchal propaganda to actual feminist rallying cry. The word “bitch” has similar parallels, where some feel like it’s an insult to women, but overtime, others believe it’s a point of empowerment; for example, this is the moniker mission of Bitch Magazine.

PATRIARCHAL PROFESSIONALS: There are lots of jobs that go only to or primarily to men, like being pope. Why not show what it looks for women to occupy those professions? This can be really anything where women are underrepresented or non-existent like from construction worker to Fortune 500 CEO to president of the United States. Take the sciences for example, by picking your group to dress as scientists in their lab coats, an astronaut like Sally Ride or Mae Carol Jemison, mathematicians, etc. it raises awareness about this issue.

LITERARY/MOVIE HEROES: This can really cover some great ground from dressing as flappers, Zelda Fitzgerald and Djuna Barnes to more recent feminists like R.K. Rowling or belle hooks (by wearing a bell and a big hook!). You can also dress as your favorite fictional character like a handmaiden from The Handmaid’s Tale (to make a big feminist point) or a Leslie Knope or a Olivia Pope.

SUFFRAGETTES: Get rowdy in some radical bloomers! With all the protesting going on, this would be a wonderful extra way to do double duty as both a a fun bachelorette party uniform and a protest one. When you wear it to the next women’s march make sure to carry a sign that says, “I woke up from the dead cuz we still have to protest this shit.”It helps create a reminder that fighting for women’s freedom is still an every day thing.

PLANNED PARENTHOOD PINK: There’s a tradition where bachelorette parties raise money from passersby in order to pay for the party through games like suck for a buck. What if you just used this time to raise money for Planned Parenthood? There’s absolutely no reason why you can’t do some goodwill while having a good time at the bachelorette party.

HERSTORY HEROES: HIStory books often overlook the impact women have made on history, ask your b-party to pick famous women in history. When people ask who you’re dressed as you can explain who you are, but more importantly, why you thought it was important to dress as her too.