Take your bachelorette party to the next level with a little help from our overseas sisters, the British. Yes, with their pomp and circumstance our sisters know how to throw down both a scone and a party, especially when it comes to their hen parties. Hen parties are the equivalent of bachelorette parties in the US and they like to get all dolled up in fancy dress (that’s British for costume). Costumes are a great way to unite the party especially if there’s a common theme and antics. END_OF_DOCUMENT_TOKEN_TO_BE_REPLACED 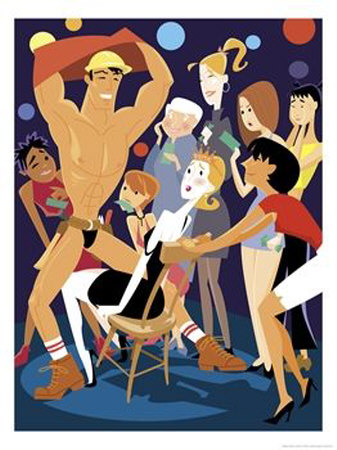 It’s the last call, the final mile, and the end of an era.  It’s the time you

It’s a night that strikes fear into the hearts of many a young lover – where fiancés disappear in the night to sow wild oats; where irresistible strippers spread their legs for the almighty dollar; where “what happens in Vegas stays in Vegas” is more than just a motto, it’s a credo; and where the ability to remember the night’s events is worn either as a medal of honor or as a sign of disgrace.

The event itself has historically been the man’s day, yet women are now taking part as well. Some women dare to rival the debauchery of bachelor parties, but many also insist upon propriety and decorum above this one “get-out-of-jail free” card.  No matter your taste in parties, it’s important to make sure the party is a representation of your ideals – not what other people think a bachelorette party should entail or how a woman should act.

Contrary to popular belief, I don’t believe this momentous night is about saying goodbye to singlehood. Whether you’re the bride with the “suck-for-a-buck” t-shirt, or want to form a sewing circle, a bachelorette party is more about bonding with friends – of all genders.  Traditionally, this is a same-sex party, and while I’m all for ladies’ nights, women keep anatomically dissimilar friends these days.  So invite your guy friends! There is no rulebook that says a bachelorette party has to be ”just the girls.”

We’ve all seen the trend where opposite-sex friendships dissolve because a significant other felt threatened, or that eventually the lady felt like the male friendship was inappropriate, whether it really was or not. What does it say about a relationship that limits with whom you can be friends? If you value a friendship of the opposite sex, it’s important to honor it, and if your partner values you, then he should respect these friendships as well. It’s a powerful testament to see brides make a man a bridesmaid, and vice versa. A relationship is stronger when a partner can accept friends of all shapes, sizes and anatomy.

As my friends and I brainstormed on my own party, we stopped to consider the girls in relationships – would their boyfriends and husbands approve of a bachelorette trip…to Vegas?  We quickly noted the folly of this thought process – we considered ourselves progressive women, yet even we have been conditioned to look to our men for approval. Yes, it’s respectful to share information about the event, but we women have autonomy to make decisions, exercise that right, even if they are unpopular ones. So chose Vegas or whatever type of event that makes the night a happy one for yourself.

There are double standards when it comes to the party scene as well. Though equal opportunity partying is expected, it is still common for partners to be manipulated into thinking that if one partner abstains (for example, from seeing a stripper), the other should be held to the same standard.  The desire to party hardy and see a stripper does not by default mean a partner is straying from the relationship (there’s a no touch policy in the strip joints anyway). Sayonara-singlehood parties do have a bad reputation, but a relationship falters not because of the nature of the party, but because of deeper, rooted issues in the relationship. If trust cannot be shown even in the brief presence of a stripper or just amongst friends, how can it ever be earned before you get to the altar?

Having experienced a bachelorette party or two already, I was constantly dismayed at how most women treated this opportunity.  Most wanted to go to the beach and read – no alcohol, no scantily clad men, no penis pops or disastrous costumes only suitable for Halloween parties – not because it’s what they wanted, but because of a belief that this type of behavior was unbecoming and inappropriate since they were soon to be someone’s wife. In asking these ladies the reasons behind their choices, they simply explained, “those days are over for me.”  These ladies, who in college did keg stands, flashed their assets and spent many a night praying to the porcelain god, could not let their hair down for one night. It is perfectly fine to move past college nights of drunken debaucheries – BUT – there’s no need to assume sainthood just because we’re putting a ring on our fingers.  Neither extreme is a fair representation of who we are or who we will be, because the truth of the matter is once we do marry, we’re still the same girls who ran naked through the quad freshman year. History does not have to repeat itself, but we also don’t have to abandon it either.  Your partner loves you for who you are now, not who you will become.  Don’t change and compromise yourself because you think you have to as a wife.

The truth is there is no such thing as a “last hurrah.”  We said goodbye to singlehood the moment we stepped into a monogamous relationship.  A bachelor/bachelorette party is not a chance to experience singlehood for “one last time” – it’s a chance for camaraderie with your closest friends, to laugh, to relax. These parties are harmless, but when more power is given to its stereotypes over trust in a long-term relationship, it’s a sign of weaknesses in the relationship.  If these issues come to light, it is my hope that the partner has enough confidence to reassess the relationship, or at least address the real issue at hand. If there is real trust and each partner understands the true reasons behind hosting a bachelor/bachelorette, which is friendship, then there should be no limitations in the style of a bachelorette party.  We should be free to be ourselves amongst our friends, men and women alike – be it a night full of shots or a relaxing day at the spa.