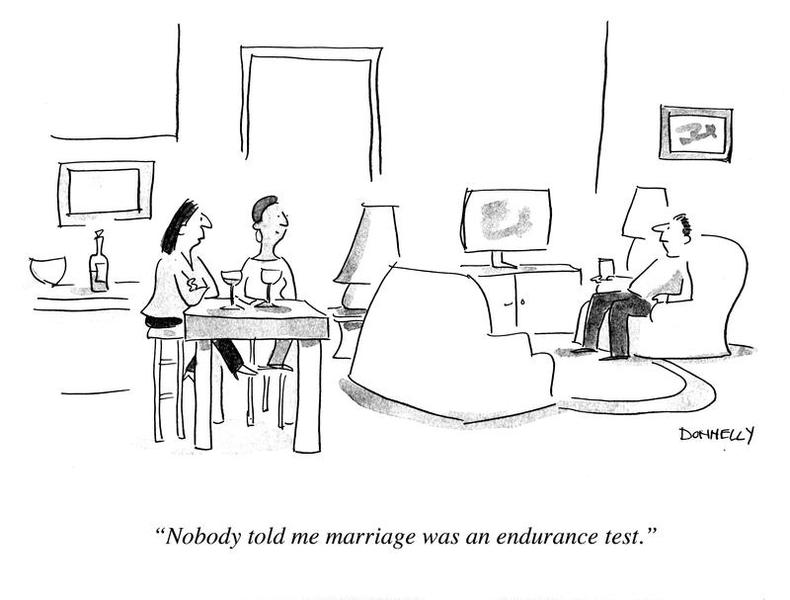 New Yorker cartoonist, Liza Donnelly takes to the TEDWomen 2010 stage to talk about the power of humor. She shares her journey as a female cartoonist and breaking the glass ceiling in her field. (She joined the New Yorker in 1982, when she was only one of three women on staff). What’s most interesting to brides out there though, is how her humor works because it’s tied heavily to female culture and traditions.

There are many absurd wedding traditions out there – that  bonnet from bridal showers, needing your parents permission to marry (cuz you’re an adult after all), carrying the bride over the threshold (cuz she’s been going to P90x and is probably stronger) and taking your husband name (cuz women’s names have equal value). Whether we laugh or groan over these traditions is important, it’s a friendly dissenting opinion that we’d rather be drinking those mimosas to turn the bridal bingo game into a drinking one instead.

“We’re told what shape we’re supposed to be in, we’re told what to wear, and how to do our hair and how to behave. Now the rules that I’m talking about are constantly being monitored by the culture and we’re being corrected and the primary policemen are women; because we are the carriers of tradition. We pass it down from generation to generation. On top of these rules they keep changing…if you don’t like these rules, and many of us don’t….If you don’t like these rules….what better way than to change them with humor. Humor relies on the tradition of society, it takes what we know and it twists it. It takes the codes of behavior, and the codes of dress and it makes it unexpected that’s what elicits a laugh. Now what if you put together women and humor, I think you can get change. Because women are on the ground floor and we know the traditions, we know the tradition so well we can bring a different voice to the table.”
So if you’re a bride you finds herself tired of the gendering in most wedding traditions, don’t worry. Donnelly insists that humor and women are some of the best tools you can use to change that, “I truly believe we can change this thing one laugh at a time.” I couldn’t agree more!
Here’s More Funny Women Who Are Hilariously Rocking the Boat on Tradition: 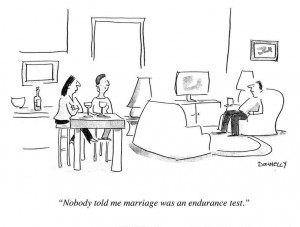 Breaking Pregnancy News – Or Not

How to Give the Best Wedding Shower Gift

Jesus Recruits Sarah Silverman to Spread his Word on Abortion

Best Commercial About Your Period Ever!

Mazel Tov, Liz Lemon! You Are A Beautiful Feminist Bride.

Donnelly has written and participated in a number of books including: Funny Ladies: The New Yorker’s Greatest Women Cartoonists and Their Cartoons, Sex and Sensibility, Cartoon Marriage (about her life with fellow New Yorker cartoonist Michael Maslin) and a popular series of dinosaur books for kids. Her latest is When Do They Serve the Wine? The Folly, Flexibility and Fun of Being a Woman.